Wishing a Happy New Year to all readers of this blog – thank you for reading.

It has been a depressing 2022 and the omens for 2023 don’t look great. I’m not completely convinced about the polycrisis notion, but for somebody in the UK the impact of events (the war), the cyclical downturn and the structural weaknesses of our economy and society (where to start?) make for a bleak start to the year.

So how better to begin my reading, amid the relaxing mayhem and death of detective fiction (and a quick re-read of The Wealth of Nations to decide whether I have anything to say in an upcoming Adam Smith workshop), than Katie Stallard’s Dancing on Bones? A journalist, the author has reported for years from Russia, China and North Korea. The book was published just as Russia invaded Ukraine, so doesn’t reflect the most recent events, but it starts in Ukraine in 2014, with the initial invasion of Crimea. The book is a reflection on how these autocrats – Xi , Putin and the Kims – use history (I should write ‘history’) to cement their hold on power. In particular, it describes how in each case history has been rewritten into myth, with a specific conflict turned into a regime founding story. I hadn’t known that the USSR used not to make such a big deal of World War 2, that China’s memorial days were even more recently introduced, or indeed that the successive Kims simply invented the account of the Korean war that is taught to all North Korean subjects from kindergarten on.

It is a bit disconcerting to read of the events of 1989 told as distant history – I’m old enough to have super-clear memories of watching the TV reports from East Germany, from Prague, from Romania in late 1989, and in one of my jobs immersed myself in the detail of perestroika to interpret the USSR economy.

The most engaging parts of the book are those told from direct experience, the reportage, not surprisingly. Even so, I learned things I hadn’t known – especially about N Korea – and it’s very well written. It’s a good complement to the excellent Strongmen by Ruth Ben-Ghiat (I haven’t read Gideon Rachman’s The Age of the Strongman). Let’s hope 2023 turns into a bad year for autocrats. 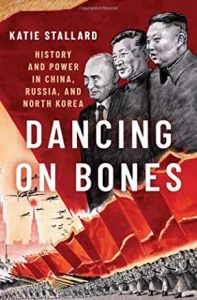