I’ve polished off Ananyo Bhattacharya’s The Man From The Future: The Visionary Life of John Von Neumann in just a few sittings (a long train journey from Lancaster in torrential rain helped), and thoroughly enjoyed it. Parts of the tale were familiar from things I’ve read before, probably the many histories of computing. But much of it was new, and my goodness what an extraordinary person.

This biography is organised partly chronologically but also partly by chapters concerning each area of knowledge in which Von Neumann had a profound influence. And there are so many of them: pure mathematics, quantum physics, ballistics, the atomic bomb, computing, game theory, bringing expected utility theory back to life, cellular automata…  So he was a significant figure intellectually in maths, physics, economics, computer science, and even eventually biology. At the same time he was actively engaged in defence policy and busy with committees and meetings, zapping all around the country. He died rather young, and tragically knowing that his cancer was eating at his extraordinary mind. Highly recommended. 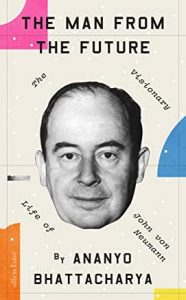