A terrific book I read in proof has arrived here: it’s The War of Words: A Glossary of Globalization by economic historian Harold James. As the book notes at the start, this is a time of the polarisation of ideas about how to interpret the economy, society and politics. Nationalism is on the up and globalisation has become a dirty word. Well, the key point of the book is that the disputes about the world are in part due to the way different uses of the same word can lead to muddled thinking. “This book starts from the notion that moments of profound social transition spark new questions and inspire new vocabularies.” And yet fuzzy concepts obscure discussion rather than clarifying it. The book seeks to clarify potential differences in meaning, so that communication can perhaps become an exchange of ideas more than an angry shouting past people with opposing views.

The chapters each take a word, often an ism: capitalism, socialism, populism, globalism, but also technocracy, democracy, hegemony, debt, and more. They take a journey trough the history of how each term has been deployed, reflecting the changes in society along the way. The complex and changing politics of debt are a great example, and this chapter is a masterly and brief aerial view of why various types of debt – personal, corporate, sovereign – have become so problematic in the 21st century. The historical perspective is essential (I was very struck by Danny Quah’s pointing out on social media today that 2021 is as far from 1980 as 1980 was from 1939…. this is sobering if you remember 1980 as an adult). The debt chapter compares well with David Graeber’s much-praised vast tome Debt, in terms of setting out key political issues of our own time.

I also particularly liked the chapters on technocracy and populism; one could do worse than start students out with these two chapters before diving into the more extensive literature. Again, they have a clarifying focal length, just enough detail to start orienting oneself in these debates of competing isms and politiks. Professor James has the capacious knowledge that makes this possible and a wealth of historical details. Who knew that technocracy was a term born of World War 1, introduced by Californian engineer William H Smyth? He saw it was the means to ensure science and technology servied society. Technocrats took another giant leap forward with World War 2, with the recruitment of science into the comprehensive war effort and then the managerialism of the post-war era. Periodic revolts against the technocrats have occurred, such as Alasdair MacIntyre’s influential polemic After Virtue; but they are essential despite the constant need to maintain a balance between experts (techno-) and people (-cracy) which will inevitably shift over time.

Of course there are omissions but the point is clarification of terms, not exhaustive analysis. As the book concludes: “Words matter: … language can empower citizens.” This is exactly why ‘fake news’ and misinformation have had such a malign influence, why authoritarians control the media, why ‘woke’ and ‘neoliberal’ and many more words can become terms of abuse. We are indeed in a war of the words, and I recommend this book as ammo. 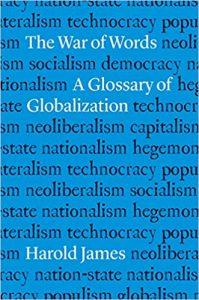