I’m late to Radical Uncertainty by John Kay and Mervyn King, which was published last year. It took me a while to get into the book but I’ve enjoyed it and found much to agree with. The basic hypothesis is well known: that the kinds of models and methods useful for understanding what the authors call ‘small world’ or well defined problems are not useful for dealing with the contexts of many actual economic challenges. In these cases, from innovation or financial stability to climate change, ‘radical uncertainty’ demands a less narrowly formal approach. The term the book uses is that we should be asking ‘what is going on here?’ By radical uncertainty they go beyond Taleb’s famous black swans, or events in the fat tails of distributions. Rather, they mean there is no stable underlying probability distribution at all. This is the territory of unknowable futures. Is the Earth’s climate going to change irreversibly in the years ahead and if so how? There’s no probability to read off for this.

Some of the analysis is familiar. For instance the idea of reflexivity (from Popper via Soros among others) undermines the stationarity of probability distributions. In other words, one source of radical uncertainty is that we humans respond to events in ways that can be self-fulfilling or self-averting (see Chapter One of my Cogs and Monsters!) Kay and King also emphasise the important role of narratives, increasingly recognised (and btw we have a terrific Bennett Institute event on this coming up). I strongly agree with their scepticism about the scope for replacing humans with machine learning systems to get ‘better’ outcomes – as they put it, justice should be admininstered in an individual, not a statistical, manner. Otherwise we’re in the nightmare world of Minority Report. Human intelligence is accumulated collective intelligence, and co-ordination and institutions are all-important.

The book is full of examples of where policies go wrong by assuming a small world problem in a context of radical uncertainty. The UK pensions regime for example, applying technical valuations of the worth of pensions schemes which assume a stationary distribution of future returns – something belied by the evidence. Future risk can’t be eliminated so what’s needed is a future risk-sharing mechanism, rather than raising contributions now to unaffordable and unnecessary levels. (See for instance this excellent article about the UK’s USS scheme.)

As you would expect given the authors, the book is wide-ranging and beautifully written. There’s a tacit acknowledgement that these two eminent economists have changed their minds about the applicability of much of mainstream economics, for Mervyn King at least held an important role at the heart of mainstream policy. Good for them, though – so have I. As well as reading Radical Uncertainty on its own merits, it offers an interesting insight into the tides of change within economics, about which I’ve also written. 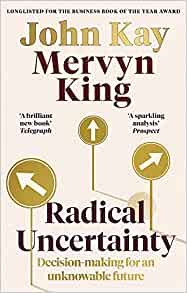