The unattractive word ‘herstory’ always makes me grit my teeth but of course I had to read A Herstory of Economics by Edith Kuiper. Nobody with any interest in economics can have failed to notice the welcome discussions of what a male-dominated profession it is, and how distorting that is. Not much has changed yet as a result (in terms of proportion of women, or selection of research questions, or indeed sometimes-toxic culture) but at least there is an awareness and a plan on the part of the professional associations.

One key thing I learned from Kuiper’s book is that there have been many more female economists than I ever realised. As well as some (now-)familiar names – Joan Robinson, Sadie Alexander, Rosa Luxemburg, Elinor Ostrom – the list at the front has many names I didn’t know, and also some I did know but had never considered to be economists. But the book makes a persuasive argument that this reflects the exclusion of women from universities until well into the 20th century, and writers on economics outside academia should therefore be included. The list is almost three pages long, for the period up to around the mid-20th century. Even then it has some omissions – Phyllis Deane for instance, or Edith Penrose. (Maybe the latter is a bit too late for this history, but then Ostrom is included.)

The book is ordered in broadly thematic rather than chronological chapters, after an introductory chapter about the origins of political economy, covering subjects like property rights, education, production, consumption and wealth/finance. The final two chapters cover government policies and then the role of feminist economics. While this organisation makes sense – a chronology would not have worked – it does mean there are some sharp corner turns as a chapter jumps from, say, an analysis of labour in the household to Ida Tarbell’s expose of Standard Oil, in the chapter on production.

Nevertheless, the book describes the important contributions of women to economics over more than a century, and in doing so illustrates the kinds of questions and social reality generally ignored by the male mainstream. It ends with a focus on the need for feminist economics to expand. I’ve never myself been interested in the separate arena of feminist economics because all of economics and economists should be feminist. The AER should be covering the kinds of questions that feature more often in Feminist Economics: the macroeconomics of gender and care (the topic of the current special issue)? Absolutely.

Still, that’s mostly about tactics. A Herstory of Economics gives a voice to some of the pioneers never included in the standard intellectual histories of the subject. 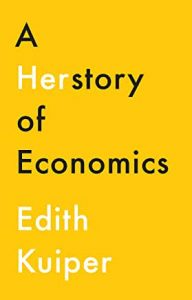