The Price of Time: The Real Story of Interest by Edward Chancellor has generally been very well reviewed (see here and here for example) but sadly didn’t grip me. It has one message, hammered home in every chapter (which are organised more or less chronologically): that too low an interest rate (below the natural rate) is damaging. As a microeconomist, looking at the consequences of massive QE in recent times, this seems a persuasive argument. The case is handily set out in a section discussing John Locke’s view (p43 – I paraphrase a bit):

As someone who has been surprised by the macroeconomics argument that an unnaturally reduced price will make credit markets work better, these points make sense to me. The bulk of the book consists of illustrations of these various points using examples from past and present. It is a polemic: it asserts that low real rates have caused weak growth, asset price bubbles, high debt and financial fragility.

But I don’t think the book really grapples with how to reconcile the micro (interest rates as a market price) vs macro (interest rates for demand management) dilemma. Keynes is described as an unbeliever in a natural rate of interest and dismissed as somebody who never missed an opportunity to argue for lower rates. Nor does the book explain why real interest rates (and so presumably the natural rate) have trended lower for centuries, millennia even (see this Bank of England working paper).  Nor did it help me think about how to reconcile the short-term market clearing role of interest rates with the long term Ramsey formula that would give us now a low social rate of interest (if you take it seriously, zero rate of time preference to respect moral equivalence of future generations, plus an elasticity times a close to zero long-run growth rate).

So, while I largely agreed from the start with the point about monetary policy being too loose for too long post-2008, I ended this feeling like I’d been bludgeoned, and still with some unanswered questions about the interest rate. But it must be me, given the uniformly glowing reviews. 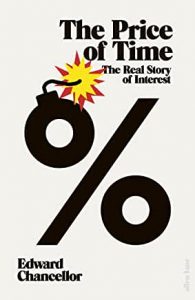