When I was in the early days of my previous journalism career, writing for the Investors Chronicle, and also pregnant with child number 1, I was taken by a stockbroker (I think it was Smith New Court, bought by Merrill Lynch in 1995) on an investors’ tour of Budapest and its environs. It was early 1990, and the ‘shock therapy’ privatisation of companies in the formerly communist countries was under way. One visit vivid in my memory was the day trip to Ganz Electric on the outskirts of Budapest, where it seemed like iron ore went in at one end and everything from tractors and trains to light bulbs emerged at the other. But the toilet paper for the office suite was locked up in a cupboard to which only the Director’s formidable secretary had a key.

Ethan Kapstein’s Exporting Capitalism: Private Enterprise and US Foreign Policy brought this all back to me because one of the chapters covers that post-perestroika era. (Indeed, my previous job had involved interpreting perestroika for western European clients of an economic forecasting company and I, like many others, was coming to realise that the figures for material output of the Soviet bloc had led us to greatly over-state the prior economic growth of those countries.) Kapstein, now a Prof at Arizona State and a Director of a conflict studies center at Princeton, had previously been a banker and worked for the US Government and the OECD. He therefore had a seat on various front lines in variously troubled economies. This experience illuminates the book’s analysis. I found it a very interesting read.

The book is a history of the ups and downs of the US’s consistent focus on relying on private investment, particularly FDI, as a vector for economic development and a handmaiden to US foreign policy goals – above all, limiting the spread of Communism to developing countries. Starting with postwar Taiwan, the US has insisted on the central role of private enterprise. One explanation is ideological, the deep-seated US reverence for business and the market. Another is simple pragmatism: official aid will never be sufficient to meet the scale of the investment need in low or middle income countries. A third is an implicit theory of change: that multinational FDI builds local supply chains and has multiplier effects, setting down long-term roots for sustained development, and inoculating local people against socialist ideas and undesirable (from the American perspective) other overseas influence.

Of course, the record has been mixed, to say the least, even among the post-Communist countries. The multinationals required to do the investing have their own aims, which are not obviously aligned with long-term national development needs. Some – such as ITT in overthrowing Allende in Chile – played deeply troubling roles. With hindsight, shock therapy was too much shock and not enough therapy – the idea being to create quickly enough people with enough of a stake in the market to prevent a reversal to communism. But heterogeneous local institutional and political conditions turned out to make a big difference to outcomes.

The historical chapters in this book are fascinating. I was stopped short in one of the final chapters by the reflection that times are changing (indeed) and the US is now converging on China’s state capitalism. This seems a bizarre over-interpretation of the shift – more complex than often painted – away from globalisation. And anyway, as this chapter observes, official aid is still absolutely dwarfed by investment need. The private sector will fill the gap, or the investment won’t happen. It would be good to get away from the old chestnut that state and market are opposites, when they succeed or fail together, and for the same reasons. The history of FDI underlines the need for contextual nuance. Still, a very interesting and enjoyable read, gaining much from the author’s personal practical experience. 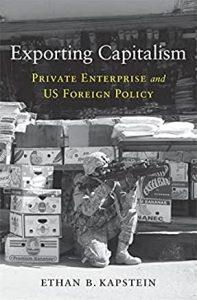