, propelled both by enjoying this memoir of a life as an academic economist and by righteous anger. (In fact, I’m posting this review 3 weeks too early on the tide of this sentiment.*)

Professor Strober embarked on her career in the late 1960s, and was therefore one of the pioneering feminists to whom my generation owes so much. The book starts with her initial experience at Berkeley, being told by the department chairman that she will never get tenure – ostensibly because she lives in Palo Alto, in reality because she has children. The shock of realising the truth on her drive home across the Bay Bridge launches her into a commitment to feminism in general and to tackling the sexism of economics and the academic world in particular.

[amazon_image id=”B01CRU4QV4″ link=”true” target=”_blank” size=”medium” ]Sharing the Work: What My Family and Career Taught Me about Breaking Through (and Holding the Door Open for Others)[/amazon_image]

This is not an angry, polemical book at all. It’s a warm and readable memoir about family and friends as well as career and the politics of gender. Professor Strober grew up in Brooklyn in a loving family, and was the first to go to college and graduate school. She tells of the tensions of moving away from that background, and also the tensions in her marriage to an ambitious medical student and researcher – a marriage which eventually ended in divorce. Athough not at all bitter in the telling, the book is a reminder of how hard it was for a woman to combine career and children. (It still is – just think about the relatively small proportion of prominent women who have children.)

Thanks in part to the battles fought by earlier cohorts of women, the sexism we face in the workplace today is as nothing compared to those early days of the struggle for recognition. But the anger reading this book kicked in when I reflected on the continuing male dominance of economics in particular – our proportion of women being closer to computer science and mathematics than to any other social or natural science. Just as I finished reading

I happened upon this reflection on getting tenure written by Ellen Meara. Nor is this a US issue – it’s as true in the UK and EU. Economics has a women problem – as Justin Wolfers and Noah Smith among others have noted – and that means economics has a problem. A subject done by men about men can’t claim to be either social or a science.

There is, I think, some recognition of the problem in the economics establishment, and some well-meaning efforts to address it. However, these efforts do not yet extend to a wide acknowledgement of some fundamental points – above all that there is something wrong with the (mainly male) insiders’ definition of what makes for ‘good’ economics.

At the end of last year I sent a survey to about 30 teachers of economics in high schools, asking what they thought were the main barriers to girls choosing to study economics at university; for although the total number of people doing economics degrees has been rising in the UK, the proportion who are female has been declining. The single most popular reply was that it was the ‘character of the subject’. I recounted this to a highly sympathetic and non-sexist male colleague. “Well,” he replied, “It’s not clear to me that there’s anything to be done about this.” That’s the problem. If the trend continues, we’re going to have to rename economics ‘men’s studies’.

I admire Professor Strober for spending her career actively doing something about it. This is a book to inspire all female economists and give all male economists pause for thought.

* It’s 22 April for the Kindle edition – the hardback will be out in mid-May.

A book with the title

is very enticing. Could the author, behavioural economist Iris Bohnet, really have the effective, evidence-based techniques for improving the earnings and job market outcomes of women relative to men? Does she have the answer to the dilemma that a woman can get on by acting like a man, only to be criticised and disliked for being unfeminine.

Well, Bohnet’s list of interventions is very persuasive and she cites plenty of supporting evidence. The first part of the book sets out the evidence of bias, conscious and unconscious. Part 2 is about people management, and focuses on businesses’ hiring, promotion and management. Part 3 is about education. The final part is a set of broader insights about ‘designing’ diversity and covers topics such as the importance of role models, the effectiveness of diverse groups in decision-making contexts (boards and elsewhere), and the role of social norms, of transparency, and indeed of ‘design’, a mnemonic for ‘data, experiment and signpost’. Bohnet argues that use of data uncovers bias, experimenting with changes, and using signposts – largely behavioural nudges – to change people’s behaviour. Do this, she promises, and gender inequality could be overcome within years, not decades.

i’m inclined to agree. The book’s evidence seems solid. There are many examples, such as Google’s discovery that its female employees were twice as likely to quit as the average. It mined its data to discover that the issue was really that parents were more likelt to leave, and it therefore extended both maternity and paternity leave. Now there is no difference between male and female quit rates. The Kennedy School’s own points system (Bohnet is a professor there) looks reasonably effective.

doesn’t address is what will get institutions and businesses to bother. Even those paying lip service to gender equality don’t have a strong incentive to change their ways, run (largely) by men (largely) for men. Why would they care if profits could be a bit higher in the long run if they acted differently? Things suit them very well as they are. It is hard to see organisations implementing the ‘what works’ measures described here unless they happen to be run by men (or women) who are already converts to the cause. It’s like the old joke about how many psychiatrists it takes to change a lightbulb (only one, but the lightbulb has to really want to change).

So I am ever more certain that tougher legislation will be required to get things moving. Targets for women on the boards of listed companies. Mandated minimum quotas for women and members of minorities in the senior ranks of bodies funded by taxpayers. When that day comes, all those institutions will be able to turn to this book to find out how to do it.

This past couple of days I’ve been attending the IDEI/Toulouse School of Economics digital economics conference, where the Suzanne Scotchmer Memorial Lecture was given by Joshua Gans.

Josh has a new book out soon (March), definitely one to look forward to, The Disruption Dilemma. The blurb says: “Almost twenty years ago Clayton Christensen popularized the term in his book

, writing of disruption as a set of risks that established firms face. Since then, few have closely examined his account. Gans does so in this book. He looks at companies that have proven resilient and those that have fallen, and explains why some companies have successfully managed disruption — Fujifilm and Canon, for example — and why some like Blockbuster and Encyclopedia Britannica have not. Departing from the conventional wisdom, Gans identifies two kinds of disruption: demand-side, when successful firms focus on their main customers and underestimate market entrants with innovations that target niche demands; and supply-side, when firms focused on developing existing competencies become incapable of developing new ones.”

However, his lecture was on his paper on the market for scholarly attribution, which interprets the assignment of co-authorship between senior and junior scientific researchers in terms of a signalling model. It was very interesting and perhaps sheds some light on the growing trend toward larger numbers of co-authors on science papers. The day afterwards, Justin Wolfers wrote in the New York Times about a new paper by Heather Sarsons showing among other results that women get zero credit for papers on which they are listed by co-authors (unless the others are also women). While this is a finding that will not surprise any female academics, it’s also kind of shocking to see the empirical results so starkly. No doubt Josh will blog about the gap between the rational world of his model and the non-rationality of male economists.

It’s International Women’s Day and my Sunday newspaper has a big feature asking ‘Does Tech Have a Women problem?’ (bizarrely, for a tech supplement, not online). A question to which the answer is ‘Duh!’ Shockingly (for a social science), economics isn’t any better. Noah Smith forcefully pointed this out in a recent column.  In the UK, the Royal Economic Society is soon due to publish another report on the proportion of women at different levels in the academic hierarchy, but there’s no reason to think it will be better than the 2012 outcomes. My university is celebrating its women with a little film (including me, hmm) but I don’t think my department is any better than the norm for economics.

There’s no quick fix; it will take a mixture of encouraging female role models for young women economists and students (especially while still at school), making sure all-male panels don’t feature at conferences, raising the consciousness of hiring and promotion panels so they do not confuse “best candidate” with “male”, and so on.

(I’m reviewing it elsewhere) and although irritating in some if its generalizations about economics, it’s terrific about the role of women in the economy and economics, and is a short and enjoyable read. One of its central arguments is about the need to measure better (mainly) women’s unpaid work outside the market, not included in GDP, something also advocated in my

. As the chart below shows, the increase in the UK’s female economic activity rate during the past generation has been substantial (up from 55.5% to 72.4%) and it is extraordinary not to have regular data that make it possible to evaluate the consequences of switching between unpaid and marketed work. 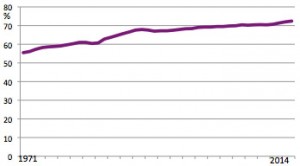 Jonathan Gershuny and his team gather time-use data to explore who does what in the non-market economy in the UK – a new survey is due to be published early in 2016. The database on their website has a bibliography of relevant publications covering time use data from around the world.

by Mukesh Eswaran. Women younger than me are unlikely to have read Simone De Beauvoir’s

– it was all the rage among 1970s/80s vintage feminists. It’s a book that changed my life. Although far more about culture than about economics, it places huge emphasis on the vital need for economic autonomy for women. There is of course a Journal of Feminist Economics. Amartya Sen’s eye-opening article about missing women is 15 years old now. Nothing has changed. The attitudes in India to rape are shocking evidence of that.

It would be great to gather more reading suggestions – welcome in comments or via Twitter.

. A Twitter conversation later, here is my curated version of the suggestions.

There were also Twitter suggestions about women economists living and working now, including: Anne Kruger, Dambisa Moyo, Ngozi Okonjo-Iweala, Emily Oster, Esther Duflo, Helene Rey, Deirdre McCloskey. But I can think of many others and I think a Worldly Philosophers-type collection would need to stop short of modern times. One needs a bit of hindsight to judge lasting influence, although I’m sure many of those on the list will qualify in time.