I caught up with Timothy Wu’s The Attention Merchants: The Epic Struggle to Get Inside Our Heads on my recent travels. It’s a very interesting history of advertising, not surprisingly US-focused. There are some compelling characters in the earlier part of the story – some I knew about already like Bernays, others unknown such as the rather extraordinary Claude Hopkins. Advertising and media have always, I guess, attracted outsize characters. And some of the tales about the impact of ads are astonishing – early campaigns promoting smoking as a health-giving activity; the genius of the ‘Marlboro man’ campaign, taking Marlboro from a 1% market share to the 4th bestselling brand in the US in less than a year.

The book is excellent (as one might expect from the author of The Master Switch, a terrific book) on the interplay between technological and commercial or creative innovations. Wu writes: “Technology always embodies ideology, and the ideology in question [with the spread of cable TV] was one of difference, recognition and individuality.” The arrival of many upstart channels successfully contested the broad middle ground previously held by the main networks, and with it the cohesive, mass attention of network TV viewing.

The book moves on from old media to new media, and I also enjoyed the section on the early days of the internet and the stumbles and successes in getting all of us online. Email was an early killer app, which one forgets. “It may be hard for some to imaine a moment when receiving email was considered a big deal.” But there was indeed the movie You’ve got Mail featuring AOL in a comedy romance. Wu also reminded me that AOL got people online by sending them a physical disk in the post, or later free on the front of magazines – apparently they mailed several hundred thousand floppy disks in a 1993 mailshot – and got a 10% success rate. The company’s chief marketing officer said, “50% of the CDs produced worlwide had AOL’s logo on them,” by the late 1990s, the book reports.

As it gets towards today, the book is a bit less compelling, and I think this is because it’s so hard to get one’s mind what’s going on in the world of attention-grabbing. Of course, we know Google and Facebook are eating all the ad revenue (and attention) but there’s that fraudulent, algorithmic, complicated market, the imperative of SEO, and the fragility of offline advertising. Not to mention the blurring of news, native ads, fake news, and random dog and cat videos. It would be unfair to criticise Wu for not pinning down all this, and the addiction of social media, in a final chapter, and I’m not. The book really ends with that promising moment when ad blocking looked like a thing; but events have moved on.

There is an afterword about Trump, “the attention merchant turned President,” and then an epilogue calling for technologists to turn their focus to “the goal of reclaiming our time and attention” in these days of clickbait and the ludic loop of browsing and checking all social media without cease. The grim alternative? “The enslavement of the propoganda state as well as the narcosis of the consumer and celebrity culture.” But it isn’t just down to technologists – the battle for attention starts with oneself.

by Joe Moran, having picked up the paperback in the Blackwells at the University of Manchester. It’s an excellent social history of my life and times, and a reminder about the way shared cultural experience has shaped the nation.

There are lots of nuggets I could pick out, but I liked this one on TV masts:

“For a brief period the television mast was part of the industrial sublime, that awkward British genre that has emerged at various historical moments to get excited about railway bridges or electricity pylons. These high-guyed steel lattice masts… were like modern day cathedral spires, their sight and even their names evoking provincial pride and signalling the arrival of modernity.”

We certainly spoke of our local mast, Winter Hill, when I was growing up in the valleys of Lancashire, and it still has a romantic, evocative sound to my ears.

One of my best site visits as a BBC Trustee was a trip to the long wave mast at Droitwich near Birmingham (more here). There was something mysterious about being pointed to a cable and told, ‘That one’s carrying Radio 4,’ or putting one’s ear to the bars of the steel gate surrounding the transmitter and being able to hear The Archers. But then, I get excited about railway bridges, pylons, chimneys and mills as well. Sublime indeed. 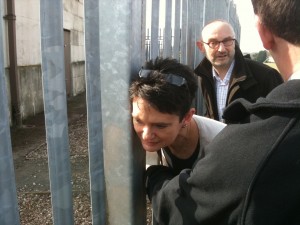 Me listening to The Archers, the hard way 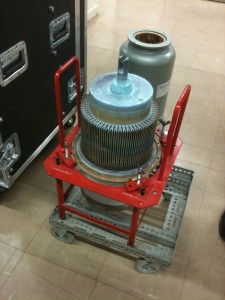 A long wave valve – high tech of the post-war years 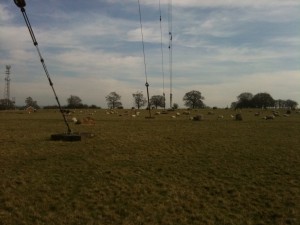