It was thought-provoking reading Deirdre McCloskey’s Beyond Positivism, Behaviorism and Neoinstitutionalism in Economics right after Jamie Susskind’s Digital Republic. They’re about different subjects of course, but also have contrasting philosophies. The Susskind book points to more government action, much more, in shaping digital markets, and I agreed with some – althoug not all – of his suggestions. McCloskey is concerned to make the case against the frequently-heard kind of analysis that market failure X requires government action Y to fix it. And I sort of agree with her too. Am I just hopelessly inconsistent?

To take a step back, this book has three messages. One is that it’s incorrect and misleading of economists to claim – as so many of us always do – that the positive and the normative can be separated, and all we’re doing is the objective, evidence-based analysis. In this section the book targets a 2017 paper by Werner Erhard and Michael Jensen that I haven’t read but sounds philosophically naive. For a little reflection – really only a little – shows this to be false: if we’re recommending an action for its good outcomes, ‘good’ is an inherently normative, evaluative criterion. I wholeheartedly agree with McCloskey on this point and wish I’d been able to read this book before writing those sections of Cogs and Monsters.

McCloskey’s second point is to argue for a broader, multi-dimensional, humanities-inflected approach to economic analysis. She takes particular aim at ‘neoinstitutionalists’ from Douglass North to Daron Acemoglu for their reductionist view that economic institutions are wholly described by incentives and utility-maximising outcomes, arguing that standard economic models alone are insufficient for explaining modern economic growth. Her own view – set out in her major Bourgeois virtues trilogy – is that a change in culture toward liberal (in the old-fashioned sense) ideas are needed to explain the scale of change between 1800 and now. Changes in incentives bring small (Harberger-triangle sized) gains, not increases in incomes by many multiples. I’m on board with this too, while still thinking the economic max-U approach brings interesting and useful insights.

Her third aim, though, is to argue for a more libertarian public philosophy: governments mess up economies more than they fix problems, and policies had little to contribute to the massive growth of the past 200 years. Here is where I diverge. For sure there have been many government failures too. Indeed, markets and governments tend to fail in the same contexts and for the same reasons (natural monopoly, externalities, incomplete markets etc). But I disagree with her implied counterfactual that there would have been an even more massive improvement in living standards in the era of modern growth without government. Collective action problems need collective action even if the location of the need shifts over time with technology, or with the complexity of high fixed-cost markets characterised by technological or other uncertainties, or with social expectations. So yes, there are a lot of simple-minded government-can-fix-it proposals – on this point McCloskey takes aim at Mariana Mazzucato‘s claim that the government in effect brought us the smartphone, albeit caricaturing it somewhat. But I’d contend we’ve of late had too little market-shaping policy rather than too much – including in digital domains.

Some of the terrain will be familiar to McCloskey’s readers – the importance of ethics in economics, of culture in growth, the misleading cult of statistical significance. I enjoyed reading this book nevertheless – her style is a bit of an acquired taste and I like it although I know others don’t. And it’s a compact discussion of some crucial issues economists should be contermplating. Even where I disagreed, it made me think. 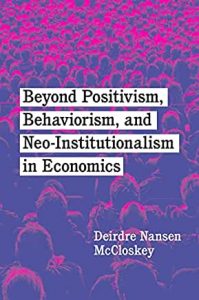