The joy of travel to conferences – conversations with people you wouldn’t set up a Zoom to chat to, hearing new research you wouldn’t dial in to a webinar to hear, and the travel time for reading. It definitely (still) outweighs the aggravation of checking in. My recent Eurostar journeys saw me through Jamie Susskind’s The Digital Republic: On Freedom and Democracy in the 21st Century.

We held a workshop on a first draft of the book at the Bennett Institute, where Jamie is an affiliated researcher, so I suppose I’m bound to look kindly on it. It’s an ambitious and largely persuasive diagnosis of the political problems caused by the power of big tech, and a set of proposed solutions. It’s thoroughly argued – as you’d expect from a skilled lawyer –  and avoids the sweeping generalisations and analytical wooliness of some well-known attacks on the digital giants.

The book has many parts. It starts by setting out the fact of digital power and why this is a significant political problem – and one created by law: “There is nothing natural about the power of modern business corporations. They accrue power because the law allows them to.”  It follows this with an analysis of the more granular problems, such as dark patterns, the coding of significant ethical decisions, the pretence that ticking the T&C box is meaningful consent (“When we click ‘I agree’ we are usually surrendering, not agreeing”), and so on.

The book then moves on to set out four republican principles (NB not in the US party sense of the word, but in the engaged, free citizen sense):

All seem perfectly reasonable, at least in the abstract. Then, refreshingly for a book about the need for countervailing power to big tech, Jamie has a lot of proposals. Among them are:

I don’t agree with all of the suggestions – some (eg compulsory licensing for anyone who codes software) seem to fall foul of the parsimony principle – but that isn’t the point; the point is that governments are not powerless in the face of digital power. Indeed there is an awful lot they could be doing to tackle the ills while recognising the great benefits the tech titans have brought.

Anyway, I enjoyed reading the book, and relished its can-do approach. I agree about the need for constraint on unaccountable digital power. Was I wholly persuaded? No, and mainly because there’s an assumption of beneficent governments doing all this on our behalf. It’s reasonable to doubt either their goodwill or their competence. More on this in my next post after I’ve finished reading Deirdre McCloskey’s latest offering. 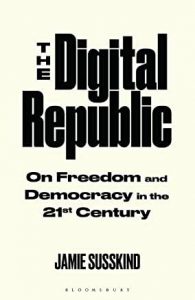 Other reviews: Joahn Naughton in The Guardian, Andrew Lilico in The Telegraph….