Nick O’Donovan’s Pursuing the Knowledge Economy: A Sympathetic History of High-Skill, High-Wage Hubris is an interesting evaluation of the policy consensus of the 1990s and early 2000s concerning the opportunities afforded by digital technology and globalisation for a transition to better jobs in the western economies. My own 1997 book The Weightless World (25 years ago this year!) features as one of several capturing that economic policy zeitgeist, what the book terms (following Peter Hall) a ‘growth regime’ – “a set of economic policy ideas and assumptions that are underwritten politically by a distinctive coalition of supporters.” In other words, a mental model of how the economy can prosper that becomes the policy zeitgeist. (Although I’d challenge the focus of this concept on just firms and governments, as the concept ignores the household and voluntary sector, both large and being affected by digital.)

The book traces the historical evolution of the policy ideas, mainly the centre left (Blair & Brown in the UK, Clinton in the US), and the way the financial crisis torpedoed any optimism about new opportunities to upskill the workforce and create satisfying new jobs. It also politely critiques the knowledge economy analysis in itself, essentially for unfounded optimism about the scope for new technologies to complement rather than substitute for labour and for ignoring the transition costs associated with globalisation. O’Donovan also points out the policy blind spot – until very recently – about increasing market concentration and rent extraction. Just a few people have long pointed to this as a source of economic problems, among them Brett Christophers.

There certainly was plentiful hype – Thomas Friedman’s books leap to mind. I’d defend The Weightless World on the basis that it predicted greater spatial and income inequalities and paid attention to social tensions, and would argue that I was prescient (much too soon…) about gig employment patterns and new digital currencies. But I also overlooked the costs for some people of the reordering of global production, or at least assumed policy would be sensible enough to look after them. At the same time, the Knowledge Economy paradigm did encapsulate some significant changes under way in the structure of the economy. I think O’Donovan somewhat underplays the insights while rightly pointing out the irrational exuberance.

The book ends by linking the failure of the Knowledge Economy growth regime to post-2008 political polarisation, and hoping that the current period of disillusion and volatility will in fact prove an opportunity for a new, better “growth regime” to develop. Let us hope…. 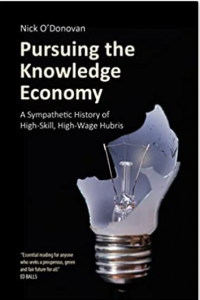