Limits of the Numerical: the abuses and uses of quantification (editors Christopher Newfield, my dear colleague Anna Alexandrova, and Stephen John) is right up my street. It’s a collection of thoughtful essays exploring exactly what the subtitle says, some general and some relating to specific issues of quantification in education and healthcare, and (by Anna and Ramandeep Singh) the measurement of wellbeing.

The aim of the volume is to move beyind what it characterises as the Original Critique (set out in some classics like Desrosières and Porter). This critique points to the historical context of measurement and quantification, and the use of the presumed authority and objectivity of numbers as an instrument of politics or power. As the introduction points out, the Original Critique assumes this deployment of numerical thinking is successful. Yet in recent years expertise – generally involving evidence and numbers – has been steadily demonized, and independent evidence-based agencies have either been targets for populism or lost legitimacy more broadly.

One sign of the demise of expertise was the New Public Management era of Blair and Clinton, disciplining experts by use of quantitative targets. Subsequently populists have deployed numbers against experts too, but in their case appealing to public opinion or crowd size. Thus, “The numerical idiom became just another part of the degraded rhetoric of politics.” But perhaps the real nail in the coffin of quantified expertise was the financial crisis and its aftermath: whatever the experts were doing, it didn’t deliver: “Against the promise of governance by the numbers, the 2008 meltdown and everyday experience both revealed a regime of incompetence, political interference and elite bias.”

There are interesting dives into the spread and effects of higher education rankings – as the book notes, audit culture here has become performative, bringing into being the measureable phenomena; orphan drugs – featuring the “unholy alliance” between patients and pharma companies seeking to profit from financial incentives to develop drugs for rare diseases; and climate science.

I was particularly interested in the chapter on the measurement of wellbeing as Anna and I are co-authors on this subject, and indeed I attended an excellent conference on wellbeing research last week. The chapter sets out the different definitions and hence methods of quantification of wellbeing and sets out what it calls “Letwin’s dilemma” after the former minister who helped introduce wellbeing measurement to UK official statistics. The dilemma is that most philosophical and psychological approaches recognise separate dimensions of wellbeing, but a political sponsor needs a simple, measurable and comparable concept  to compete with other ‘hard’ metrics in the choices facing givernments. This is a genuine dilemma; but the chapter argues against what has become the single metric in policy debates, a scale-based measure of Life Satisfaction, as too reductive and detached from underlying psychological phenomena. This is exactly the debate I had at the conference with Richard Layard, the UK’s most influential researcher on wellbeing.

I polished off the book in just over a day, and it would interest anybody working on the sociology and politics of measurement and related areas, taking forward the now well-known critique of quantification and linking it persuasively to the political trends of the past decade. 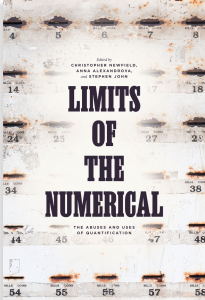