The latest in our Perspectives series is out now: Britain’s Cities, Britain’s Future by Mike Emmerich. Mike, for those who don’t know him, was a key architect of the devolution deal for Manchester, and prior to that had worked in the Treasury and 10 Downing Street. It’s hard to think of anyone who has had such a ringside view – from both sides – of the debate about the role of the UK’s major cities in the economy and society.

The book starts with the historical perspective, looking (from the perspective of agglomeration economics and political economy) at why the big industrial cities like Manchester, Liverpool, Sheffield and Birmingham rose, and declined, and may be on the point of renewal. The following two sections reflect on the role of cultural and social life, and institutions and politicla governance, in explaining the fortunes of a city.

The final chapter has some suggestions for cementing the current phase of renewal – vitally important in the post-Leave vote political landscape. In short, stop thinking small, and stop thinking ‘now’. Success takes a generation or two but we needs to start investing at scale, for a very long time. Specifically:
1.  More and better transport, with political consensus so the projects get delivered.
2. Build more housing and invest in the schools and amenities to make every neighbourhood feel liveable
3. City, business and universities – strong local institutions – must work together
4. Strong local skills institutions involving (& funded by) both employers and the state, and different in different cities, not national templates.
5. Create jobs for the people ‘left behind’ starting with high quality, publicly funded temporary jobs in their community.

This all requires a long-term planning horizon, money, and above all political commitment at the centre and locally. A tall order perhaps, but with a better chance of hapening now than at any time since the 1960s. If you want to know more, Mike’s your man, and the book is available to pre-order now – with you by the weekend.

BTW, this is the 11th Perspective, and we have some cracking new ones in the pipeline. There are a couple of promotional offers available for a while, one for the existing titles, and a discounted subscription to the forthcoming ones. 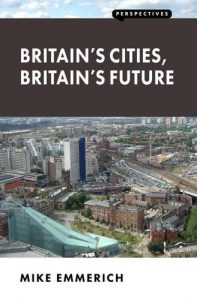