I’ve been on a run of reading history books, and am about to finish Adam Tooze’s The Deluge: The Great War, America, and the Remaking of the Global Order 1916-1931. It’s beyond my professional competence to review properly, in the sense that the book clearly has a distinctive perspective on the way Woodrow Wilson used America’s financial lifeline during and after the war, and the Treaty of Versailles negotiations, to shape the impending American Century. My guess is some historians would disagree about how purposeful this exercise of financial power was. Nevertheless, to the non-expert reader, this is a brilliant and compelling book – above all for taking a global perspective. I particularly liked the inclusion of substantial sections on Japan and China, and on India and the seeds of collapse of the British Empire. It is easy for a west European to forget for example the role of Japan in Siberia, and to concentrate on Russia’s western borders. 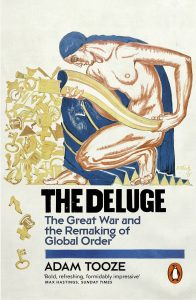 There are also illuminating perspectives on the impact of the war on America itself, including the deployment of the new Federal Reserve Board and the governance of the US economy. Tooze points out that before Wilson committed to support the Entente, substantial private finance had been directed to the war effort: “Through the private business contacts of JP Morgan, supported by the business and political elite of the American Northeast, the Entente was carrying out the mobilization of a large part of the US economy, entirely without the say-so of the Wilson Administration.” When the US officially entered the war, the state’s role in the management of capitalism expanded greatly, only to be firmly contained again in the post-war era. It is often forgotten how severe the post WW1 recession was, even in the US – Tooze underlines its impact on the inter-war order. (Another book that focuses on this event, in a fascinating albeit maverick interpretation, is James Grant’s The Forgotten Depression)

Another very interesting thread running through The Deluge, at least for economists whose only perspective to date comes from Keynes’s famous The Economic Consequences of the Peace, is Tooze’s argument that Keynes’s polemic was a distortion of the truth. Tooze argues, contra Keynes, that the Germans tricked the Entente into the armistice, rather than the other way round. He agrees that the book reflected widespread disillusion with the Treaty, but also contributed to its loss of legitimacy and “helped to further poison the atmosphere between London and Paris.” It might not even have helped Germany, Tooze suggests: “A good faith effort to honour the Treaty, even if it had fallen short, might well have steered the Weimar Republic away from the ruinous crisis of 1923.” Furthermore, Keynes painted the alternative financial settlement he suggested as “an entirely novel idea, a great opportunity that had been missed at Versailles,” knowing well (as he had been there) that it was discussed at Versailles and rejected by Wilson (not Clemenceau). For if there had been greater generosity toward the Germans, the British and French would have had to seek debt write-offs from the US. “The result was grossly to misrepresent the politics of the peace making process,” Tooze concludes.

As it happens, I was (nearly) finishing the book at the Trianon Palace hotel in Versailles where the treaty was signed. Another fine historian, Margaret McMillan (The War That Ended Peace and Peacemakers) was attending the same conference. Here she is in front of the commemorative plaque. 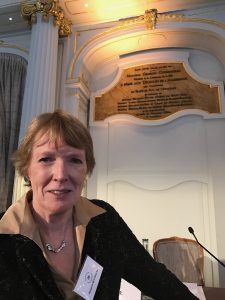