A while ago I read two of the books about the development of the Covid19 vaccines, Vaxxers by Sarah Gilbert and Catherine Green, and Spike by Jeremy Farrar. There’s also a fascinating Kate Bingham lecture about how she led the UK’s vaccines taskforce, dealing on the one hand with the manufacturers and scientists and on the other with the UK system of government. I also recommend a Petersen Institute report on the supply chains and how they evolved.

This by way of prelude to having this week read The Vaccine by Joe Miller, with the BioNTech duo Özlem Türeci and Ûgur Sahin. In some ways the story is similar to the Gilbert & Green account of the Oxford/AstraZeneca one, brilliant basic science done on a small scale. Like the Oxford scientists, the Mainz ones were sure early on that Covid19 was a serious threat and acted on that in an impressive display of foresight. What is equally amazing was the acceleration of the usual development process, and unbelievably complex scaling up of production and distribution in a fraught and political environment. The supply chains are mind-boggling: at the initial stages the BioNTech/Pfizer vials had to travel around Germany, Austria and Northern Italy but also – for packing into vials and labelling – to Northern Ireland, all at minus 70 Celsius. All this when it was tricky even getting sausages into N Ireland post-Brexit.

Some differences stand out. A key one is that BioNTech was able to deliver its mRNA vaccine thanks to having patient billionaire investors – German twins you’ve never heard of before – having been forced by private equity investors to sell their previous company. The political environment was interestingly different, including the intra-EU tussles. Some EU voices argued against purchasing BioNTech because its partner, Pfizer, was American, when after all Curevac and Sanofi were EU-only companies in the effort to develop vaccines. The path from basic research to products in mass use is so fraught it’s amazing anything could happen at all.

Anyway, The Vaccine is another fascinating read. Strange though how the past two years seem to have fallen into a black hole, with restrictions here going today and a Russian invasion of a democratic European country under way. Of course, the fundamental reason for that strange phenomenon of memory is the vaccines. 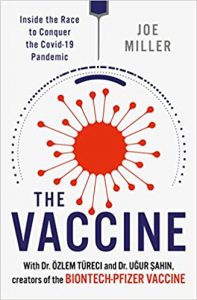 There has been an awful lot about robots around lately. As well as the links in my previous robot blog post, there was this primer from Robin Hanson, for example. Yesterday I did a talk at COMPAS in Oxford about research questions in the economics of migration, drawing on my experience as a practitioner for five years on the Migration Advisory Committee and also eight years talking to businesses when I was a Competition Commission member.

In MAC discussions, I was always keen to make sure what we called ‘bottom up’ evidence from companies, as well as ‘top down’ evidence from economic indicators,  informed our reports. The reason is that there was always a category of immigration that didn’t sit neatly in the framework of a labour market ‘shortage’. Economists naturally would expect a shortage to be resolved by rising real wages and/or increased labour supply, subject to frictions so it could take some time. But some businesses were clear they always need some immigrant workers, because they operated in global markets. They ranged from law, finance and professional service firms through to high-tech start-ups and engineering businesses. How should we think about their needs, in the context of migration policy?

My suggestion is that economists researching migration need to look more closely at ‘task-based’ models of production and trade. Rather than the conventional models that derive labour demand from a ‘production function’, with firms choosing how much (and what kind) of capital and labour they need to fulfill specific roles in producing the output, task-based models split production into tasks, and allocate inputs to tasks depending on the prevailing wages and technology. When technology is changing rapidly, as it has been, and factor prices change, tasks can be reallocated. In particular, many sectors of the economy, including services, have split their production into stages,some of which can be located anywhere in the world. In the existing literature, this is the phenomenon of ‘global unbundling’ or supply chains stretched over international borders. It can be driven either by low wage costs overseas, or simply by it being more efficient to allocate certain tasks to overseas contractors and workers.

There are some excellent papers on separate aspects of the choices this approach presents to firms – Richard Baldwin and Frederic Robert-Nicoud on trade, Daron Acemoglu and David Autor on labour markets, Ottaviano, Peri and Wright on migration – all building on a 2008 AER paper by Gene Grossman and Esteban Rossi-Hansberg. These need joining up to account for the joint decisions many businesses are taking: do they hire native workers, aliens or robots? Do they locate them at home, requiring some immigrants, or overseas via offshoring? What are the effects of different choices on the level of employment of natives, rather than either aliens or robots? And on their real wages? If migration flows are reduced, what adjustments will businesses of different kinds make in assigning other inputs to tasks – will offshore aliens or robots in fact do better than onshore natives?

All of these are empirical questions so the big problem, it seems to me, is data. The US has a skills database (O*NET) but I’m not aware of one in other countries. The trouble is, if the task-based approach is more useful (more realistic) than the production function approach, it requires quite a significant mental shift. For one thing, wages will be determined by productivity in tasks, so regressing real wages on individuals’ skills will be misleading whenever firms reallocate people with given skills to different tasks. The newer approach fits much better with how I’ve heard businesses describe their strategic decisions over the years. The Acemoglu and Autor survey chapter in the

is a good, comprehensive starting point. The Economist did a brief write-up on the robot aspect a while ago, too.