here, given that I commissioned him to write it. To entice readers, however, here is his argument in a nutshell: “This book argues that not only is identity changing profoundly but that money is changing equally profoundly, because of technological change; and that the two trends are converging so that all we will need for transacting will be our identities.” It’s thought-provoking, informative and entertaining. Anyone interested in any of money, social networks and/or mobiles should read it – after all, there are few experts who know as much as Dave about the overlap between digital technology and money.

Trail over, I was interested to read this article by Paul Laity about Penguin’s revival of the Pelican imprint, its series of accessible, reasonably short non-fiction books on a wide range of subjects of contemporary interest. Sound familiar? Our Perspectives series got there a year ago, albeit sadly without Penguin’s marketing budget. Still, I agree with their sense that the ‘thirsty public’ is back – even though non-fiction book sales have apparently been declining. Surely

. I found the style of his

irritating but it was nevertheless well worth reading. I’m sure the new one will be equally valuable. 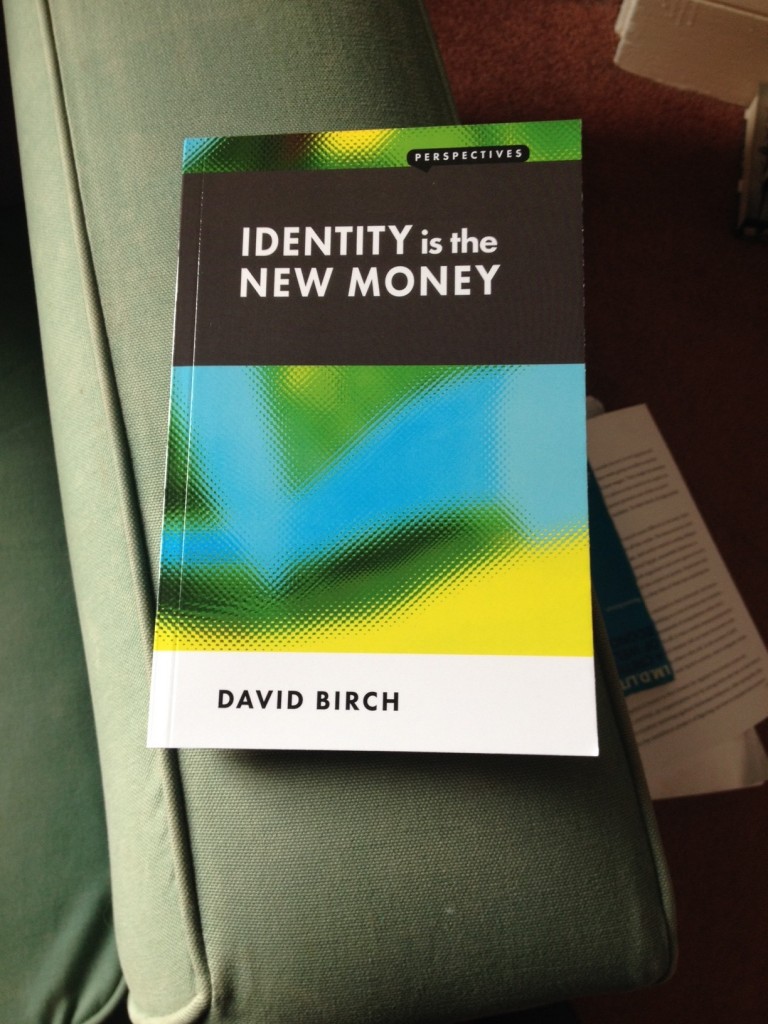 OK, as series editor, I’m biased, but this is an exciting book. Dave’s one-man expertise on the technological issues involved in both identity security and digital money have converged in an absolutely illuminating and highly entertaining read. He argues that there is no trade-off between our financial/data security and our privacy; the marriage of mobiles and social networks means we can have both. As the infrastructure is put in place, cash use will evaporate – and a good thing too, in his view.

and will be shipping soon!

In Bristol at the end of last week for the Festival of Economics (#economicsfest), I picked up a little book in the Arnolfini bookshop for some light reading. It’s John Armstrong’s

from The School of Life. It filled a train journey back from Cambridge yesterday evening (after my talk to the Cambridge Society for Economic Pluralism).

It’s a self-help book and is actually full of perfectly sensible advice – for people who are not poor but not rich either. If you’re genuinely worrying about not having enough for housing, food and heat, there is not much anybody can say to help you worry less. However, for the rest of us, I think this book offers a useful reminder (a) that money carries all kinds of emotional baggage and (b) that what you do with money matters as much as having it. As I have enough money these days, I’m not very interested in personal finance, but some of the observations in the book struck a chord nevertheless. When I have some moments of respite from a whirlwind of activity at the end of this week, I might even try some of the exercises, before plunging into Christmas shopping.

However, I did look at The School of Life website in writing this, and note that it appears to be a shopping site. The Utopia candles looked particularly appealing.

Hmmm. I’m a fan of enterprise and profit-making, but what’s your relationship with money if you want to acquire £35 candles named after literary idylls (

expecting to find a re-telling of a familiar story. In fact, it’s not only full of things I hadn’t already known, but also serves as a great overview of the analytical issues in international monetary arrangements. The book works as a very well-written history, with lively personalities – even though many of them, especially the protagonists John Maynard Keynes and Harry Dexter White, come across as rather unlikeable in their arrogance. It also works as an excellent introduction (for students and others) to the specific history of the era and the general economic principles of the international monetary system.

One prominent sub-plot is, of course, White’s spying for the Soviet Union. He was questioned by J Edgar Hoover’s HUAC, but confirmation of his espionage came late, in the 1990s with the

archives. I hadn’t before realised that the FBI had not informed the President of the extent of they evidence they held on White by 1946, in order not to let the spy ring know its cover had been blown. Hence White continued to play such a prominent role in the new World Bank until his death. However, the FBI did ensure he wasn’t appointed as Managing Director of the IMF, as President Truman originally planned, this being the origin of the tradition that a European holds that post.

Nor had I appreciated how badly Keynes went down with the Americans before, during and after the war. Steil makes a strong case that Britain would have done better out of both Lend-Lease and the post-war arrangements if its government had sent somebody else as the British negotiator. Most of the Americans couldn’t abide his intellectual arrogance and smartypants manner. However, nobody in Britain could bring themselves to believe that the Americans didn’t have an innate loyalty to them, whereas the reality was that many on the US side were actively determined to bring about the end of the British Empire and the role of sterling. As this became a reality after the war, Ernest Bevin said plaintively to the US Ambassador, Lew Douglas, surely Britain should not be “lumped in” as if it were “merely another European country?”

The book ends with an interesting Epilogue on China. Although a surplus country, it is not in the same position as America in 1945, as an architect facing a blank page. Chinese officials are also aware – as White was not – of Triffin’s dilemma: the issuer of a reserve currency “cannot pursue different domestic and international objectives at the same time,” as central bank governor Zhou Xiaochuan expressed it. Still, the US-China trade imbalance has brewed monetary trouble and we can’t yet be sure that monetary nationalism won’t be the consequence. How does that old Chinese proverb go?

The Liberty Reserve story is fascinating. E-money guru Dave Birch (at 45:00) has been doing wonders explaining it. There’s been so much written about Bitcoin that I’ve only just realised that Liberty Reserve and several other competitor electronic money sites existed. It might be difficult for the authorities to distinguish between criminal and socially-useful innovation in e-money, although presumably the ability to verify identity is going to be key. Even so, electronic local currencies will no doubt arouse the interest of Her Majesty’s Revenue and Customs in case of tax minimisation activity. There’s surprisingly little sign of policy interest in electronic currencies, however. The only recent paper I’ve spotted is the ECB’s Virtual Currency Schemes (pdf) of October last year.

by Lawrence Weschler. The latter three are some years old now. I’m delighted to say, though, that Dave Birch is even now – quill pen in hand – writing on the subject of money and identity.