I read the proofs of Helen Thompson’s magnificent new book Disorder: Hard Times in the 21st Century a while ago, and specifically before the Russian invasion of Ukraine. Having just read the finished product, it seems all the more prescient and timely. Take this observation, for instance: “For five decades, Central and Southern European energy dependency on Russia has been a geopolitical fact of life. Indeed, since the First World War’s end, the periods in which Germany has eschewed Russian/Soviet oil and later gas have been short … Since it has endured three decades into a post-Cold War world where Moscow uses gas as an instrument of power, Germany cannot escape responsibility for whathappens to states with borders with post-Soviet Russia.”

The book braids together three themes in its synopsis of present disorder and instability. The first is energy-driven geopolitics entwining the fates of the world’s major powers, destabilised periodically by discoveries or technologies (eg fracking in the US) and by events (eg Fukushima and the German abandoment of nuclear). Secondly, and relatedly, there is a sequence of economic crises with their own internal dynamic (the rise of market-oriented philosophies, China’s admission to the world trading system) but also “structural material causes”, in particular the energy shocks of the 1970s and increased energy demand due to China’s economic rise. The final section turns to democratic politics, related to the economic upheavals, and the challenges posed to liberal democracies by plutocracy and inequality, mass migration and the various shocks – the China effect on manufacturing, the GFC.

Along the way, the book weaves in much more – the institutional history of the EU, the breakdown of Bretton Woods, Middle Eastern politics. I’m in awe of Helen’s ability to take a synoptic view of underlying structural trends while mastering so much detail. How much must she read?? The book ends with some observations about what various (democratic) governments might do to tackle these linked predicaments, but it’s pretty pessimistic. I’m left with a sense of not just the length of the shadow of history but also its tenacity: instability is baked in. And as the final words put it: “How… democracies can be sustained as the likely contests over climate change and energy consumption destabilize them will become the central political question of the coming decade.” Read it to be informed, but not to be cheered. 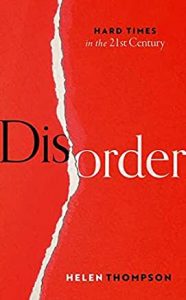 By chance, two books about the intersection of economics and the physical world have landed recently here at Enlightenment Towers recently,

by David Humphreys and

I love business histories, with all their detail about how decisions get made with no reference at all to marginal cost=marginal revenue, and David Humphreys used to be chief economist of Rio Tinto and then Norislk Nickel in Russia. He knows more than probably anyone about the economics of the mining industry, so this book promises to be full of interesting nuggets (so to speak). Paging through, one of his main themes looks to be the importance of geopolitics for the industry, and the role of government in creating a stable legal framework that will enable investment with a decades-long payoff to occur. He concludes: “The world does not have a resource problem. It cannot be ruled out, however, that it may face an investment problem.”

(well of course I’d like that one!), packed full of engineering insight. This one tells me that power density is “the rate of energy flux per unit of area” – huh? – and that moving to low power density renewable fuels will require “a profound spatial restructuring of the energy system.” My guess is that it means new transmission and distribution grids, but I’ll have to read it to be sure. The final sentence, in bold italics reads: “New energy arrangements are both inevitable and desirable, but without any doubt, if they are to be based on large scale conversions of renewable energy resources, then the societies dominated by megacities and concentrated industrial production will require a profound spatial restructuring of the energy system, a process with many major environmental and socioeconomic consequences.”

Energy seems bound to stay in the news one way or another, whether it’s bills and competition policy, or fracking, or energy market reform, or the climate change debate. So anybody who didn’t read Dieter Helm’s

when it was first out can now pick up the paperback. I reviewed it at the time. It’s a clear and well-argued read, as you would expect from a doyen of energy economics. Dieter also has an interesting article on infrastructure and the state due out in the Oxford Review of Economic Policy – it will be available in early August via his website, links on the right hand side.

Also, next year the edited volume by Dieter Helm and Cameron Hepburn (a future doyen),

will be published by Oxford University Press.