Anti-social Media: How Facebook Disconnects Us and Undermines Democracy by Siva Vaidhyanathan was published in 2018; I can’t remember how it came to be in the in-pile. Anyway, it’s an interesting analysis that does what it says in the subtitle, and does so far better than the massively over-hyped and underwhelming Surveillance Capitalism by Shoshan Zuboff the following year. The chapter each focus on a theme: surveillance, attention, privacy, protest etc.

Despite the title – and indeed the conclusion – each is quite measured and nuanced. For instance, I like his definition of privacy: “The word more accurately describes the ways we manage our reputations within and among various contexts,” rather than the all-or-nothing way it’s usually discussed. I’ve been using a similar concept, of “privacy in public,” the wish to reveal specific information to specific people for a purpose. Similarly his co-ordination problem argument for regulating social media rather than leaving it to companies themselves. Or his masterly debunking of the Cambridge Analytica claim to being all-effective at winning the Trump election.

So there’s a lot to like in the book. It doesn’t quite add up though. Although it’s mostly about Facebook, other Big Tech firms slip in as miscreants – so why were they left out in the first place? I suppose attention has turned now to the Musk-ing of Twitter so we’re less focused on Facebook than was the case in 2018, and that doesn’t mean the issues have gone away.

More than that, the regulators and politicians should be part of the story. It has taken until late 2022 for competition authorities to start to get tough, and in the UK the patchy Online Safety Bill is still chugging through the legislative process. Why was the policy world so slow to act? I sometimes wonder what would have happened if social media companies had been regulated as publishers right from the start – an option that was discussed and rejected back in the day. Now there’s an alternative history. 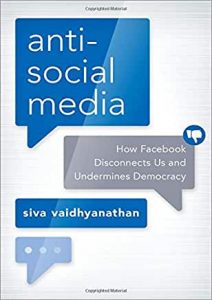 It’s possible to feel gloomy about the prospects for democracy, even with Joe Biden safely in the White House and a few regional or local elections that have gone against the extreme right, in Germany and France. The current UK government, for example, gives rather alarmingly frequent Trumpist signs of wanting to tear down some of the protections for the institutions of democracy (IDs to vote when there is next to no voter fraud, rigging public appointments, attacking independent institutions). So Jan-Werner Müller’s Democracy Rules is timely. As he puts it: “Farage did not bring Brexit about all by himself: he needed his Michael Gove… and his Boris Johnson.” Populism is an elitist game; on both sides of the Atlantic established conservative elites are at the heart of the trend. It is also anti-democratic, including in defining some groups (immigrants, asylum seekers, minorities) as outsiders by their nature.

The first chapter sets the scene by diagnosing recent political trends. The middle section of the book discusses the necessary conditions for democracy. One thing that very much struck me is that uncertainty is inherent in democracy. “On a very basic level democracy makes no sense without the possibility of people at least sometimes changing their minds.” Identity, of any kind, “is not political destiny.” Opinion polls do not reveal eternal truths. Politics is not a matter of fixing problems. “The point is that claims about conflicts in a society can be presented in different ways and there is a creative element in how major political choices are put together and offered to voters.” The institutions of democracy need to embed uncertainty – and so, for example, Müller argues that the domain of algorithmic decision making in policy needs to be curtailed.

This section ends with an interesting discussion of the relationship between technocracy and populism: techno-populism. The argument is that the will of the ‘ordinary’ person is proclaimed while at the same time technocrats are charged with implementing the ‘will of the people’ in the interests of the common good – Italy’s 5 Star movement is the example. “Technocracy and populism are both anti-pluralist or even anti-political, if one takes politics to mean that the solutions are never just given by either expertise or the fiction of a uniform popular will.”

The book ends by emphasizing the importance of intermediary institutions: parties and the media – which are of course the targets populists go for, parasitically hollowing out their host party, gerrymandering, attacking electoral watchdogs, undermining independent journalism. There is a coda offering reasons for “hope but not optimism.” As with some other excellent recent books about the assault on democracy (eg this or this), I ended up feeling rather glum, but agreed very much with the closing shot: democracy is not about hope but rather about effort. 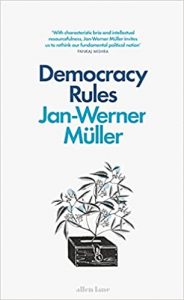