This weekend – despite having a small and demanding visitor – I polished off The Idea of the Brain: A History by Matthew Cobb. It has nothing to do with economics of course, but there are a number of things that resonated with me.

One was the way the Nobel-winning Cambridge brain scientist Edgar Adrian brought wartime experience of radio technology to thinking about how neurons respond to stimulus – and also how his commitment to public communication led him to “think about what nerves do in a rather different way from that expressed in his scientific papers. In hunting for terms that would help non-experts understand, “These concepts – messages, codes and information – now form the basis of our fundamental scientific ideas about how the brain works.” I’ve always been deeply committed to (a) explaining things clearly and in ways people can understand and (b) that you can’t explain something like this if you don’t properly understand it yourself.

There’s an interesting but brief discussion of the contrast between reductionist approaches to understanding the brain (which seems dominant) and others pointing to the emergence of complex phenomena from a few simple neural networks. I don’t know what to think of it in this context, but the path of reductionism hasn’t served economics all that well.

Then there’s an extraordinary story about an Australian patient who had an electrode implanted in her brain to manage her severe epilepsy. When she grew used to the device, it transformed her life: “With the device I felt like I could do anything …. nothing could stop me.” But the manufacturer went bust and the device had to be removed. The woman said: “I lost myself.” Horrific. How can the law and economic arrangements enable such a thing to happen? Cobb writes: “In a future world where companies are funding interfaces with our brains, we may lose control over our identity.” This goes to the heart of debates about health data as well, and the legal construct that allows data to be alienated as a piece of economic property. How can an electrode in a woman’s brain be corporate property? Well, in the way General Motors claims it still owns the car you bought because your car sends data back to GM. Watch out for ‘smart’ hip replacements or pacemakers….

Finally, another section that spoke to me points out that ‘The Brain Has a Body’ (the title of a 1997 article) and the body has an environment – “but neither the body nor the environment feature in modelling approaches that seek to understand the brain.” The input from the world is part of the system in which brains operate.

The book‘s history of thought approach is terrific, as is its linkage of technological  innovations (watches, computers, radio ….) with how scientists have thought about brains – I found this a really gripping and informative read. 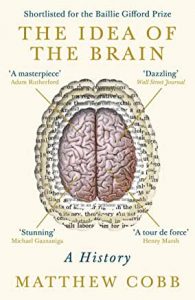