I found Zorina Khan’s Inventing Ideas: Patents, Prizes and the Knowledge Economy very interesting. It uses an impressive assembly of empirical evidence about inventors, patents, the administrators and recipients of innovation prizes and awards, and industrial exhibitions – largely in the US, UK and France – to support a specific analysis of what enabled the US to become the most innovative and richest industrial nation from the late 19th century on. As she points out, much of the literature asks why Britain was the first country to experience an industrial revolution, so the question itself is distinctive.

Her argument is that compared with Europe, there were “dramatic differences in the new approach to growth that were manifested in early US policies.” The key difference – supported by the mass of evidence – is a far greater emphasis in the US on patents (as a market-oriented innovation system) rather than prizes and awards (an administered system). A second and consequential difference is the preponderance of incremental and commercially successful innovations in the US. “Elites have always mistrusted markets: wealth and influence often lead to the convistion that the insights of the favored fiew can outperform spontaneous co-ordination,” Khan observes. The US was strongly anti-elitist (at least in that era), whereas “the most significant variable affecting whether or not a British inventor received a prize was elite education at Oxford or Cambridge,” neither university at the time focused on technical or scientific excellence.

Along the way to supporting its argument that the marketplace of ideas beats elite technocracy, the book demolishes quite persuasively the recent trend toward innovation prizes as an effective incentive mechanism. Less persuasive is the argument that patent trolling is no greater a problem than it ever was (although there clearly was a lot of litigation over patents in the 19th century).

It also makes the point that European and American patent systems operated differently. The specific institutional details mattered. So the conclusion one could draw is that the underlying elitism of European societies and egalitarianism of the US does more to account for latter’s emergence as technological leader. In which case, the longer term outlook for the US staying at the frontier may be less rosy. In any case, much food for thought in the book, and fascinating empirical and historical detail. 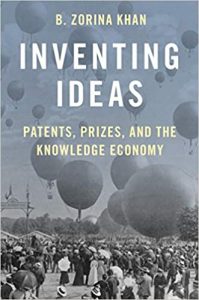