Today’s featured catalogue is from Polity Press, for January to June, & there are a few econ titles to note.

Distinguished trade scholar Fred Bergsten has The United States Vs China: The Quest for Global Economic Leadership. (They’ve kindly sent me a proof & I’ll be reviewing this.) The equally distinguished Howard Davies, now at Sciences Po, has The Chancellors: Steering the British Economy in Crisis Times (which are all too frequent of course).

There is a ‘history of economic thought from the female point of view’, A Herstory of Economics, by Edith Kuiper, and Digital Labour by Kylie Jarett looks at gig work broadly defined through ‘a critical Marxist lens’.

FInally, I’m particularly looking forward to How The World Became Rich: The Historical Origins of Economic Growth by Mark Koyama and Jared Rubin. 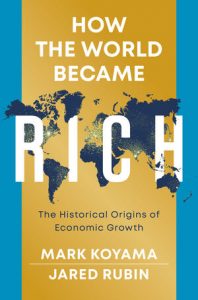