I’ve now read Jeremy Farrar’s Spike: The Virus vs the People – the Inside Story, as a follow-up to Vaxxers, and found it also very interesting. It’s less gripping as a personal memoir, although it does track his own involvement in pandemic policy via SAGE (in the UK) and WHO and other international organisations. On the other hand, it is enlightening as an insight into the dysfunctionality of decision-making in the UK & in this way is a companion to Michael Lewis’s Premonition about the US pandemic lack-of-preparedness. Farrar writes: “Many of the UK’s biggest successes during the pandemic were achieved by teams working outside formal government structures and agencies.”

We will (eventually) have an inquiry into the handling of the pandemic by the Westminster/Whitehall and devolved governments but reading Spike makes it clear that any debate about the future governance of the UK or about co-ordination between levels of government within England and the other nations absolutely needs to include lessons from the pandemic. My starting hypothesis will be that across countries there will be a strong correlation between eventual excess death rates and the competence of government, the state’s ability to co-ordinate in a crisis. The pandemic has exposed fragilities of governance.

Formal structures of government are one thing. Another message I took from Spike is the importance of personal relationships and the serendipity that introduces: “I thought, probably like most people, that the world works through official or formal channels but much of it operates through private phone calls and messaging apps.” This absolutely speaks to my bias that as soon as possible we should get back to conferences and in-person meetings. The nature of online communication is such that it excludes much exchange of tacit knowledge or small bits of information, not to mention trust-building.

The book has unflattering things to say about a number of people involved in pandemic response, not least some leading politicians; and praise for the dedicated scientific leadership. There are clearly different accounts (from the political and SAGE sides) about who said what when at key stages, particularly summer into autumn of 2020, which I guess an inquiry might get to the bottom of; Spike should perhaps be subtitled ‘an inside story’. The pandemic is not over either, and your ranking of which countries did worst will depend on your metrics: case numbers, cumulative deaths, cases and economic hit combined. Unfortunately the UK does not do well on any of these: something for us to ponder. 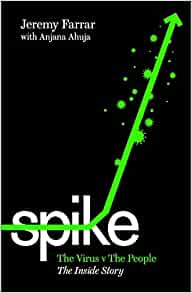