As it happened, I read Minxin Pei’s China’s Crony Capitalism in the couple of days after I’d written this article about the importance of property rights in the Financial Times. In this interesting short book, Pei links the emergence of the rampant corruption in today’s China to “partial and incremental reforms of property rights associated with nominally state owned assets in the post-Tiananmen era.” These changes decentralized control over the assets to regional and local officials, without clarifying the ownership rights. The incentive was there, from the early 1990s, to exploit the lack of clarity. At about the same time, a political decentralization created the opportunity. The appointment system went from one where senior officials appointed people one and two ranks down, to one where each layer appointed the next layer down. A market for patronage emerged, which encouraged corruption because officials needed deals with private business to make the money to pay for their jobs. Finally, a fiscal reform enabled local governments to keep the proceeds from land sales while re-centralizing tax revenues to Beijing.

The book concludes: “It is inconceivable that the CCP can reform the political and economic institutions of crony capitalism because these are the very foundations of the regimes monopoly of power.” Even if the corrupt authoritarian regime were to fall, the book argues, liberal democracy would not be the outcome. Something more like Russia’s kleptocracy would emerge. Or will, rather. “The fragility of the institutions of the party state … raies fears that even modest reform efforts could unleash a revolution. The prospect of genuine market-oriented reform is equally unpromising because such a change would eliminate the rents for the ruling autocratic elites.” Any kind of change seems to spell collapse.

In another coincidence, as I finished this book, the FT’s Jamil Anderlini (author of a brilliant e-book about the rise and fall of Bo Xilai) published a big feature on neo-Maoism in China, which he portrays as am anti-elite, anti-inequality, populist movement in the same spirit as Trumpism, Brexiteering and right-wing and left-wing populism around the continent. Sobering stuff. 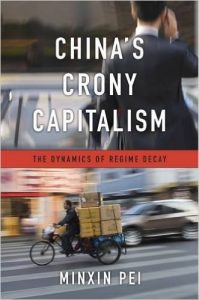