How well are universities teaching their economics students? This is the question a number of academic and non-academic economists have been addressing since a conference this time last year held under the auspices of the Government Economic Service and Bank of England. The conference papers were published as

– reviewed by Declan Jordan yesterday in the LSE Review of Books.

The debate continued yesterday at a meeting of several dozen economists held at the Treasury, working towards a statement suggesting some directions for curriculum and teaching reform, although of course it will be for individual university departments to decide whether or not they think change is needed. The statement will be published after a bit of revision and discussion.

At the meeting Wendy Carlin presented an updated model from her

, integrating a financial sector into the basic three equation model. Their new textbook will be published later this year and will obviously be well worth while. Wendy cited Claudio Borio’s excellent paper on what we’ve learnt about the financial cycle and macroeconomics, thanks to the crisis.

In today’s Financial Times, Edward Luce points out that the US – creator of the internet – has dropped from top in the late 1990s to 16th now in the OECD league for average internet speeds, and has some of the highest prices too. He notes that South Koreans speak of trips to the US as ‘internet holidays’, so unfavourably does the experience compare with online access back home. Given the rise of Samsung – which spends more than twice as much proportionately on R&D as Apple (5.7% vs 2.2% of revenues respectively) – it can only be a matter of time before online leadership migrates decisively to Asia.

The article is clear about the problem – the Comcast monopoly, and the donations the company makes to Barack Obama, along with its enormous lobbying effort. Comcast’s senior VP David Cohen is apparently one of the US President’s biggest fundraisers. Comcast spent more than $14m on lobbying in 2011, making it the ninth biggest spender in the US.

This only confirms the argument of Susan Crawford’s book

, which directly compares Comcast to the giant trusts of the late 19th century, broken finally by the struggle to implement the 1890 Sherman Anti-Trust Act. I have to say the book isn’t the most exciting read in the world – not as enthralling as Tim Wu’s

– but nevertheless it does a superb job of depicting Comcast’s strategy. It emerges as a superbly well-run business in strategic terms – although not, it seems, for customer service.

The company has been particularly astute about its engagement with Congress and regulators, and in judging the technological trajectory of the industry. However, the book also explains why and how the FCC made the decisions that now look mistaken, and is therefore a rare instance of insight into the complexities and compromises of the official and political world. This is much more useful than playing the blame game. So though there may be more US-centric detail than the general reader wants, this is an essential book for anyone interested in communications markets and digital convergence. I have to admit I’d heard of Comcast, but not at all of its controlling and founding family, the Roberts pere et fils, the unknown “robber barons” of the new gilded age.

Apparently Susan Crawford is a candidate for the post of next head of the FCC, but the book attacking the Comcast monopoly is seen to have damaged her chances. On the other hand, President Obama doesn’t need re-electing, so maybe he will be brave and nominate a candidate with the interests of American consumers at heart – I was staggered to read in Crawford’s book that the average user pays $143 a month for their high-speed internet and cable bundles.

For here is another example of the way big business has bought political power, and therefore the freedom to make still more money and buy still more power, in America. That subversion of social welfare in the interests of the rich affects the rest of the west too, not to mention cementing the future economic and geo-political strength of Asia.

, which has led to some interesting reflections on the achievements or otherwise of feminism.Here’s The New York Times view, here is Salon, and here is the Guardian book club discussion.

My goodness, what a timely anniversary reminder that there’s a long way to go still. Yesterday over breakfast I stumbled on this extraordinary ad for Microsoft software: 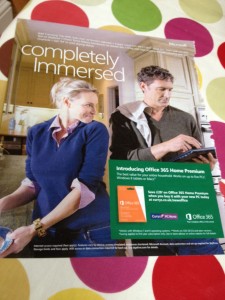 Women too stupid for computers, or just too busy doing the housework?

Today I read Maureen Dowd’s bitter review of the new book by Sheryl Sandberg of Facebook,

, apparently advising women on how to have it all, version 2.0 (version 1.0 being of course Helen Gurley Brown’s

). And also a report in the Observer of the past progress of women in public life in the UK going into retreat.

It makes me think that perhaps the gains made by the feminist movement of the late 1970s and early 1980s were one-off, that they helped one or two cohorts of women only. The economic evidence that the labour market is stacked against women is pretty strong – there is a large earnings penalty for having children, and then some. One of the most depressing books on the subject is Linda Babcock and Sara Laschever’s

– the good news is that men do ask for more pay and women don’t, so a woman who does ask will earn more. The bad news is that her male colleagues will think her a ball-breaker for doing so.

I hope younger women will re-read Betty Friedan’s book, and some of the other classics – Germaine Greer’s

And I hope women of all ages will roll up their sleeves, and reboot the struggle – when the washing up is done and the man has finished with the computer, of course (*irony*).

Laid low by a nasty cough all week, I’ve been paging through Benn Steil’s

It’s a surprisingly gripping story, pitting the Americans against the British, and the Russians against the Americans. The Communist sympathies of White are fairly well known by now. Although this IMF Working Paper of 2000 (pdf) asserts that there’s some room for doubt, despite the confirmation provided by the

, by 2013 there is none. White was trying to further Soviet interests as he simultaneously – as this book shows – used the post-war financial architecture to crush any hope of a revival of British economic and geo-political power.

The book quotes a 1947 Economist editorial: “Not many people in this country believe the Communist thesis that it is the deliberate and conscious aim of American policy to ruin Britain and everything that Britain stands for in the world, but the evidence can certainly be read that way.” The new dollar-centric financial structures were, Steil shows convincingly, intended to force Britain to keep holding out the begging bowl for international loans. He writes: “The US used its control of the IMF to deny Britain the dollars it needed to counter a run on sterling and blocked its efforts to secure emergency oil supplies.” But where De Gaulle had no hesitation in criticising the Americans, the British clung to the centrality of the ‘special relationship’ – indeed, as we still talk of this in the UK, it would have been surprising if it hadn’t had great force in the late 1940s.

The book ends by asking what the lessons of post-war monetary nationalism, embodied in the framework that survived until 1973, hold for today’s US-China imbalance. I think the counterfactual is just as interesting a question: what would the alternative history have been had Roosevelt not been so keen to weaken the old colonial power, and Harry Dexter White not so eagerly encouraged by his Soviet correspondents to accomplish this? If Keynes had survived longer, or if Britain’s industrial base had not been so thoroughly damaged by the conflict?

As for White, he almost became head of the IMF, but J Edgar Hoover – getting this one right – called him up before the House Un-American Activities Committee. White died of a heart attack soon after. I have a 1955 volume of the US Senate Judiciary Committee that reprints some of White’s papers, discovered at the summer home of the attorney general of New Hampshire – the volume is part of a study into ‘Interlocking subversion in government departments’. As the picture below suggests, the FBI’s suspicions of White was entirely understandable, even if it took some decades for KGB documents to confirm them. 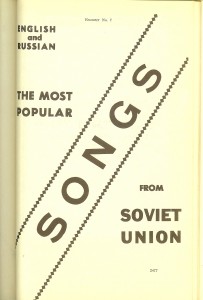 Here is the FT review of Benn Steil’s book.

The dreaded flu going around has struck me, so I’ve been paging through a book it’s easy to hold while lying in bed feeling wan. It’s

, some lectures given by Ben Bernanke at George Washington University last year.

I won’t pretend to be alert enough to have absorbed every nuance, but the Fed Chairman’s overall message is clear: of course we might have got some details wrong but we did exactly what it says on the Fed tin in acting as a lender of last resort to the financial system and calming the panic. What’s more, if you look over the long span of history (he being the author of

), the loss of output subsequent to the crisis is clear but the US economy will sooner or later get back on its long term growth trend.

No doubt it’s the combined effect of the bugs wreaking havoc on my well-being and the peculiarly horrible medicine I’ve been taking, but I’m much less sure the crisis is fixed. I’m not confident the same kind of crisis could not occur again tomorrow – the banks are still too big, too intertwined, too leveraged with – as Admati and Hellwig point out in their superb new book,

– far too little equity capital. At any rate, I don’t want to rely entirely on the forces of history. I think the Fed has indeed done a decent job in the face of the imminent 2008 meltdown; but in making the comparison with the Fed’s historical role as lender of last resort, the lectures lack a sense of the really fundamental questions about the present financial system.