Yesterday I attended a very interesting symposium at Christ Church, Oxford on the 2012 book by Robert and Edward Skidelsky,

was my passport to the event.

The Skidelskys’ book is a good and provocative read. It starts with the question posed by the famous Keynes essay,

: why are we not now enjoying much more leisure, given that Keynes was right in his prediction about the degree of technological progress. One aspect I very much agreed with is their point that it is important to keep the ideas of economic growth and well-being or social welfare distinct – this is one of the themes of my new book,

as well. GDP growth is a means to an end, reasonably highly correlated with well-being, but not an end in itself.

However, in other ways I strongly disagreed with their book. They argue for stopping growth and stopping technological progress, including, Lord Skidelsky explained yesterday, stopping or slowing down further automation of work by taxing the use of robots. To my mind, that completely misses the point about economic growth, which is not to have more and more of the same things, but to have more variety and new things. Innovation is the source of improvements in well-being, from trivial innovations to life-changing medicines or major technologies such as the internet and mobiles. GDP growth is the set of footprints left by innovation, although it fails to count the increase in welfare caused by new goods and services. At one point the Skidelskys write: “The material conditions for the good life already exist,” and say nothing has improved since 1974. This is absurd. Since 1974, UK life expectancy at birth has increased by 9 years to 81, the web has been invented, and we’ve moved from almost nobody having central heating to almost all of us having it – its lack is now taken as a poverty indicator.

The seminar included a long discussion about the a-morality or immorality of conventional economics. The economists taking part were probably atypical, as we all agreed that economics does need some post-crisis rethinking. The philosophers present focused on questions of liberalism and paternalism. Professor Cecile Fabre was particularly strong on questioning the Skidelskys’ failure to identify the ‘good life’ with some of the key values of liberalism.

I left with another book the two Skidelskys have edited,

Glancing at the contents, I think its answer is ‘no’. But even to pose the question is to make markets overly-abstract. Markets are institutions in which people have social relations. The markets for tea bags, accountancy services, and radio spectrum have entirely different structures and characteristics. ‘Moral’ isn’t a description that can apply to abstract nouns at all. One can sensibly ask if bankers are moral, at risk of generalising, but not markets.

at the Netherlands Environmental Assessment Agency (PBL) followed by a workshop at the Netherlands Scientific Council for Government Policy (WRR). It’s always interesting to present to new audiences because of the varying expertise and viewpoints they bring, and it also gave me a bit of an insight into the institutional structures of government in a country I don’t know all that well.

The themes from the book I highlighted in this case were: (a) that there is a challenge of sustainability in several domains, not just the environment. After all, the financial system was literally unsustainable and stopped working. Addressing one element is likely to involve the others, because there is a common thread in the lack of attention paid to the claims of the future; and (b) that economists and other experts need to do a far better job in measuring stocks of assets as well as flows and telling in an accessible way the tale of the extent to which current consumption has involved running down natural capital and building up financial and other debts.

The audience asked lots of perceptive questions, and challenged parts of my talk – especially my contention that ‘zero growth’ is neither desirable nor possible. So many people think of GDP growth as purely material – more designer handbags and big cars – whereas it is largely intangible in the advanced economies and anyway much more about innovation, new services and products, than about stuff. But this is a debate where environmentalists and economists are likely to continue to disagree. One of my interrogators, Wietske ter Veld (a local and regional politician and teacher of environmental sciences) kindly sent me her take on economists – and politicians, below. I would have to agree with her that we’ve got a long way to go on the political economy of policies to achieve long-term rather than short-term aims. 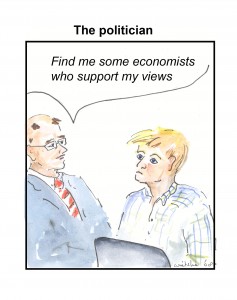 There are some things some people so fervently want to believe that no amount of evidence or logic will persuade them otherwise, no matter how brilliant they are. Adair Turner’s book

is a good book, and I’m a great admirer of his. But my heart sank when I read this new review of it in the TLS by Robert Skidelsky. Lord S writes:

“The case against making increased GDP per capita the overriding policy objective is that it doesn’t deliver the increased happiness or welfare if promises. In 1974, the economist Richard Easterlin published a famous paper, “Does Economic Growth Improve the Human Lot?”. The answer, he concluded, after correlating per capita incomes and self-reported happiness levels across a number of countries is probably “no”. In a refinement dating from 1995, Easterlin found no relationship between income and happiness above an average per capita income level of between $15,000 and $20,000. Other findings confirm Easterlin. Data from the UK show that from 1973 to 2009, there was a continuous rise in GDP per head, but no increase in reported life-satisfaction.”

Er, no. The error of logic is that if you compare a stationary (reported life-satisfaction) and non-stationary (level of GDP) time series via a chart or regression, they will as a matter of construction not be correlated with each other. And the evidence has recently flowed in that GDP growth and reported happiness are positively and strongly correlated with each other – for example, Stevenson and Wolfers. Finally, common sense should tell everyone that abandoning economic growth as a policy objective is a political and practical no-hoper: we have that now and it’s called recession. It cements current inequalities, reduced job opportunities, and voters just hate it. So actually, the task of achieving satisfying and sustainable growth is a pretty difficult one (it’s why I wrote the

was recently published in both Italy and China (as well as in English in paperback), and I’ve been struck (again) by how differently people read the same book. This is true of individuals but also of national cultures.

When I spoke about the book last weekend at the book festival Pordenonelegge, my Italian interviewer Emanuele Bompan was most interested in the political economy questions: how can politics become more able to address long-term problems? what is the role of technocrats? how can western welfare states handle their second demographic transition, to ageing and shrinking populations? By contrast, the review in the Shanghai Daily questions my argument that economic growth and sustainability can and have to be combined, and concludes:

“This essentially flawed conception prevents her from identifying the true malaise of capitalism. To sum up, her proposal about how to bring about a better balance between the present and the future is seriously limited by her assessment of the Western way of life, to which she is so attached.”

. There are Ways of Reading, too.

As part of my thinking about a book I’m currently working on, I started to re-read a book by Jonathan Gershuny,

(2000). He has led the way in work on time-use studies, as well as some key longitudinal data sets. It’s the first time I’ve read this book since it was published, and I’d forgotten how interesting it is. As he points out, “Change in time use patterns is not a mere indicator of social change; it is itself part of the essence of socio-economic development. A ‘poor’ society is one which must devote the bulk of its time to low value-added activities which go to satisfy basic wants or needs.” Low value added activities are those where the ratio of paid work per minute of consumption time is low – many hours are needed to deliver the consumption experience.

All eras of technological progress have brought complaints about things speeding up and being short of time. I was reflecting on how the recent ‘

‘ movement fits into Gershuny’s framework. It seems to be a regression in economic development yet its advocates see ‘slow’ as the most sustainable future for the economy. They are also quite likely to be high- rather than low-income members of the community (as are the buyers of organic foods). Maybe these slow fooders are sufficiently affluent that their time spent providing for the basic need of eating is effectively leisure rather than work, a hobby not a necessity. Anyway, I shall carry on reading and see if I’m further enlightened on this question.