UPDATE 2 – I’ve now done some sorting of the list. OK, the categorisation is inevitably arbitrary but it seemed helpful as the list got so long. More suggestions in the comments. And huge thanks to all who contributed.

Econtwitter is wonderful. Yesterday, an undergraduate emailed me to ask for book recommendations about the overlap between economics and philosophy. I recommended:

Then I asked Twitter, and here is the resulting, much longer, list. I won’t editorialise about them, although some are not good undergraduate intros in my view. One striking thing is how few recent overviews there are, however (as @esamjones also pointed out on Twitter). Huge thanks to all who made suggestions. This is a fantastic collective list.

UPDATE Now even more added – but this goes far beyond the original brief for an introduction for an undergraduate. There’s also a bias in the recommendations toward books critical of economics (or at least its ‘mainstream’) and, again, I think for an economics undergraduate a more neutral intro would be a better starting point. Anyway, I leave this here as a list, not a curriculum.

Jon Elster’s Nuts and bolts for the social sciences

Rawls A Theory of Justice

The Value of Nothing Raj Patel

Tomas Sedlacek’s The Economics of Good and Evil

Jerry Muller, The Mind and the Market: Capitalism in Modern European Thought

Debra Satz Why Some Things Should Not Be For Sale

Jesse Norman, Adam Smith: What He Thought & Why It Matters, chapters 6-10

Anything by Toby Ord

M White The Oxford Handbook of Ethics and Economics

Deirdre McCloskey The Rhetoric of Economics

Kenneth Boulding Economics as a Science

Explanation and Human Action by A R Louch

Paul Seabright The Company of Strangers

Robert Sugden The Community of Advantage

Kaushik Basu The Republic of Beliefs

F Hayek The Market and Other Orders 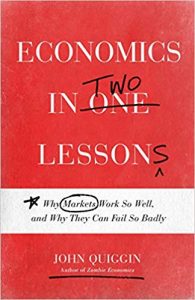 I started reading Elizabeth Anderson’s Value in Ethics and Economics, having read an intriguing profile of her in the New Yorker recently, and am about two chapters in. The book is in Michael Sandel territory. It got off to a bad start by setting up the usual straw man version of economics: “Markets are represented as the generically rational form of human organization,” she writes. “To count as rational, any other domain of human interaction would have to be governed by the same principles as the market.” This is passive voice, but it most economists I know certainly don’t think like that (there’s also clearly an issue about different meanings of the word rational’ but that’s another matter.

However, the book quickly improves by pointing out the limitations of the focus on individual choice with too little attention in economics to social influence. This for me is a problem in terms lack of conformity with reality, never mind ethics. The second chapter then hones in on the inadequacies of utilitarian consequentialism as a foundation for conceptions of economic welfare (although a Very Distinguished economist told me recently that if I wasn’t a utilitarian, I wasn’t an economist). Interestingly, Anderson seems to see a feedback loop between ethical value and social norms – “social norms are constitutive of rational attitudes” – it reminded me of Robert Sugden’s recent book, The Community of Advantage.

It’s slightly heavy going, as so much philosophy is. Oh for an equation or two to clarify the logic! But I shall carry on. I’m reading a second hand copy and amusingly one of the previous readers has heavily marked the book with references to God as the source of ethical value, challenging Anderson with citations to Corinthians I and so on. But luckily only for the intro and chapter 1, giving up on godless ethics at that point.

Value in Ethics and Economics
Price: Check on Amazon

David Colander and Craig Freedman have an answer. ‘Where Economics Went Wrong‘, to give the title of their new book, is answered by the subtitle: ‘Chicago’s Abandonment of Classical Liberalism’. They have something very specific in mind by this, namely the move from widespread acceptance by economists that economic policy does not follow from economic theory, but rather is “a blend of engineering and judgement”, an art rather than a scientific endeavour. They continue: “Clearly one wants evidence-based, objective analysis of policy. An art and craft methodology uses theory and science whenever it can.” But policy is messy and requires a methodology recognising the unavoidable role of normative judgments.” This is what they mean by classical liberalism.

The Chicago School upended this, the book continues, by “removing the firewall between economic science and policy” from the 1930s on. It did so to further a laissez faire agenda, insisting that economic science justified the conclusion in real life policy that the market should be left to its own devices. It merged economic theory and science with economic policy advice. This agenda held sway for some decades, embedded in policy by politics and the electoral success of Reagan and Thatcher.

I must say I found this argument confusing  at first because of my own perspective that the problem for much of 20th century economics was the ‘separation protocol‘ between positive analysis and normative advice, expressed by Lionel Robbins and later by Milton Friedman. However, I think it’s a similar point in fact: the claim they made was that positive economic analysis was appropriate for policy, and value judgments could be coralled into the domain of political choice, about which economics has nothing to say.

Many economists probably still think this, but my sense is their number is diminishing. Colander and Freedman end the book with an overview of the work of six economists they perceive to be working in the ‘art and craft’ policy tradition: Dani Rodrik, Ed Leamer, Amartya Sen, Ariel Rubinstein (love his book Economic Fables), Alvin Roth, Paul Romer. A shame they’re all men but I for one approve of the selection, with that major caveat.

The book is an inside-the-beltway one, of interest mainly to history of thought folks I would guess. Having said that, it does highlight a key methodological issue of importance to all applied economists.

I just re-read the famous Lionel Robbins Essay on the Nature and Significance of Economic Science. Every time one reads a book, it’s with new preoccupations and interests. So this time, here’s what jumped out at me:

“Value is a relationship, not a measurment. … It follows that the addition of prices or incomes to form social aggregates is an operation with a very limited meaning.”

“The idea of precise ‘correction’ of price changes over time is illusory.”

For Robbins, economics is essentially price theory. He wrote the essay of course in 1932, just before the development and subsequent rise to prominence of aggregate economic measures and price indices. But I think he was right to underline the pervasiveness of relative price changes and the consequences for aggregation.

An Essay on the Nature and Significance of Economics
Price: £8.83