Trade Wars are Class Wars by Matthew Klein and Michael Pettis is an excellent account of the global imbalances that have emerged in the 21st century, contributing to the GFC among other consequences. “A core argument of this book is that the distribution of purchasing power within a society affects its economic relations with the rest of the world,” they write. They trace the imbalances problem to the inequailities of income and wealth within China and Germany that mean domestic demand in each case is inadequate to absord domestic production, so the two run large current account surpluses with the rest of the world. “People who cannot buy what they produce must rely on foreign demand for their output.” Hence the ‘class wars’ of the title.

While the US should have been in the same position, given how unequal it is, foreign demand for US assets means it has run a consistent deficit instead: “For more than six decades the United States has satiated savers in the rest of the world at the expense of its own workers” – the dollar being an “exorbitant burden” in this perspective. (Another great virtue of the book is spelling out the fact that balances balance and so the capital account will be in deficit if the current account is in surplus; and if some people are saving – eg the rich in surplus countries – others will have to be borrowing – Greece, or ordinary Americans before the GFC.)

A lot of the commentary has focused on the bilateral US-China trade deficit and the “China shock” due to offshoring, but Klein and Pettis argue that the link is less direct than Chinese vs American factories, and must include an account of capital flows. It portrays inequality within China and Germany, rather than China’s low-wage manufacturing capabilities, as the root cause. The book is just as critical of German as of Chinese domestic policies: “Germany’s ideological and constitutional commitment to fiscal rectitude caused lasting harm to ordinary Germans.” The harm has taken the form of welfare cuts, eroded protection in the labour market, massive under-investment in infrastructure. One doesn’t think of Germany as particularly unequal. Yet although the average German is twice as rich as the average Spaniard, the median German is much poorer – about as wealthy as the median Polish person.

The book refers back to the writings of John Hobson in the early 20th century, when the US was the surplus economy in its gilded age, and Britain the bearer of the reserve currency burden. In Imperialism: A Study (1902) Hobson wrote: “When the distribution of income is suchas to enable all classes of the nation to convert their felt wants into an effectiove demand for commodities, there can be no over-production, no under-employment of capital and labour, and no necessity to fight for foreign markets.” Inequality and the competition for overseas markets led to what what he described as “the greed of empire.” It didn’t end well a century ago, and it isn’t going so well now.

Trade Wars are Class Wars is a tale of three economies, China, Germany and the US. I’m not sure where others fit in – including the UK, also highly unequal but with a (Brexit-augmented) current account deficit. (Greece gets a walk-on role.) Still, I found the argument persuasive and in any case reducing within-country inequality from today’s socially-destructive levels can only be a good thing. It’s a terrific book. 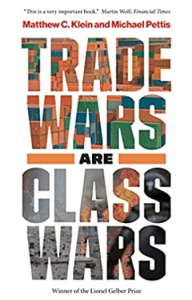