For a bit of variety, I’ve been reading Bletchley Park and D-Day by David Kenyon, who is the Research Historian at Bletchley Park. The broad story of code-breaking at Bletchley Park during World War 2, and the contribution of Alan Turing along with many others, is now well-known. The aspect explored in this book is specifically about the intelligence provided ahead of and during the D-Day landings. This includes a lot of detail about the operation of the various bits of Bletchley Park and other arms of intelligence. In one sense, that makes it a sort of ‘inside the Beltway’ account: who reported to which officer, how the different branches of the armed services related to each other and so on will be details too far for general interest.

However, there is one kind of detail in this book that I found truly fascinating, and that is about how the flow of information was organised: coming into Bletchley Park, within its increasingly large and complex organisational structures, and going out to decision-makers in the UK central command, in the US, and of course in the field before and during the attack. For information flows are at the heart of the challenge of managing any complex organisation. And the ease and cheapness of digital information flows are translating now into a growing gap between businesses and other organisations that can make use of the information and those that can’t.

In other words, it wasn’t all about code breaking. One key role was played by (mainly) women graduates whose job was to provide a weekly Index of what intelligence had been unearthed and send that to the people who needed it. There was so much raw data – decrypted messages – that making sense of its importance became at least as important. These women didn’t have exciting new machines: just their own intelligence, pencils and index cards.

Another interesting point is about willingness to receive the intelligence. General Patton was all in favour but Montgomery was not: he thought the military alone should get the Ultra information and distrusted it because he knew Churchill and others in Government were getting it too. Luckily, he had a subordinate who paid attention to the Ultra messages received.

Anyway, I confess to skipping through some parts but overall really enjoyed the book. I have an appetite for anything about the Bletchley Park story. And what could be more relevant to thinking about information in organisations than an organisation whose whole raison d’être was information? 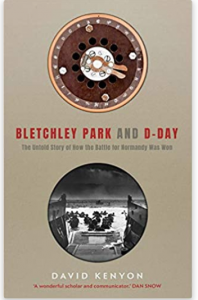