The title of Fred Bergsten’s latest book is somewhat misleading: it’s The US vs China: the quest for global economic leadership. But the argument of the book goes against the polarisation presumed in the title. Bergsten’s argument is that while the US and China are bound to compete in some economic domains, they should, and will find they must, co-operate in others. Tackling climate change and ensuring global financial stability are two of the examples of the latter. Indeed, he calls for ‘conditional competitive co-operation’, with the formation of a G2 on issues of global public goods, pandemics and other crises.

This all seems super-sensible. But it also has the flavour of a book from a distant era. Although the pandemic had happened, the Russian invasion of Ukraine had not. Nor at the beginning of 2022 might we have expected both China and the US to seem as unstable internally as they do at this moment, with astonishingly bad covid-exit policies on the one hand and the resurgence of Trumpism in public life on the other, alongside what is going to prove the most serious crisis of capitalism for at least a generation. The (geo)political pack has been not just shuffled but thrown up in the air. (And who had a monkey-pox epidemic on their 2022 bingo card??) At least Bergsten does warn about the dangers of a leadership vacuum, a G0 world, with the 1930s as a spectre of what could be.

The author’s knowledge of the international monetary system is legendary, and this is a terrific book to read for the economic insider’s perspective. Alongside Adam Tooze’s books, particularly Crashed, I now feel as informed as I’m going to be about international monetary matters. But the future now looks even more frightening than the most frightening prospect described here. 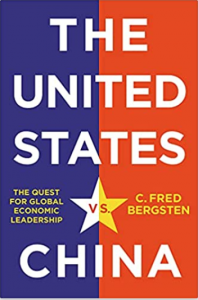