I’ve strayed outside my own territory to read a book by a colleague, Underground Asia: Global Revolutionaries and the Assault on Empire by Tim Harper. I’ll start by saying it’s definitely a commitment as the book is 650 pages long (before counting the footnotes). However, I’ve found it completely gripping and was glad to have some long train journeys this week. This is a subject – Asian political and intellectual history from about 1900-1930 – that I knew next to nothing about beforehand. The book ranges across the whole of Asia including China and India, and follows the activists on their travels to Europe and the US, whether voluntary (seeking support) or not (sent into exile). So – to use an awkward metaphor – the book joins up unknown dots. It also completely brings home the immorality of empire, with none of the imperial powers – Britain, France, the Netherlands – coming out of it with any honour as they resisted realising that the days of empire were drawing to an end. The political developments, including the spread of actively revolutionary ideas and movements after the Bolshevik revolution, dominate the narrative; but I also relished the cultural elements of the story, including the popularity of English and French detective novels in the late 19th century or the proliferation of new journals as ideas spread along seaways and railways.

Here’s a longer and more informative review for those who know more about this subject than I do. One blurb on the back, from Peter Frankopan, describes the book as reading like a thriller. It absolutely does. An excellent beach paperback for the summer. 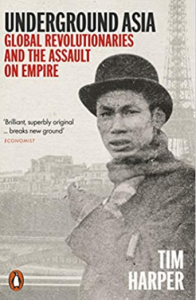 2 thoughts on “The end of empire in Asia”