The Chancellors: Steering the British Economy in Crisis Times by Howard Davies is a really interesting read. It’s an account of aspects of the UK’s economic performance since 1997, based on a mixture of looking at data and research, his own personal experience at the heart of the events covered, and interviews with the Chancellors and other senior officials during the past 30-odd years. Now, this could be a bit pedestrian, and it is certainly inside the UK equivalent of the Beltway (London postcode SW1 for Whitehall to EC2 for the Bank of England to E14 for Canary Wharf).

What makes it so interesting is that Sir Howard was in the middle of some key events. He was Deputy Governor of the Bank of England when Gordon Brown made the surprise announcement of its independence in mid-1997. (I was an economics journalist at the time, and remember the press conference vividly – my political editor colleague and I looked at each other asking silently, Did I just hear what I think I heard?) He was also close to the post-GFC debates about how to restructure financial regulation/supervision, having headed the then new FSA from 1997 to 2003. Indeed, his public service career started as an adviser in the Treasury, so he knows the institutions and the people well.

This could still be made dull, in the right hands. But adding to the reading spice, he also makes his not entirely flattering views about certain people perfectly plain. Often on picking up a new book, it’s gratifying to find that you’re cited – with this one, more anxiety-making (my work gets two references, both pretty neutral. Phew). There may be readers who are less than thrilled.

The book covers a mix of events – the GFC, the Scottish and Brexit referendums – and issues – public spending, climate change, macro policy and performance. It ends with some interesting reflections on the Treasury as an institution and whether it is in the right shape or has the right culture to tackle the challenges ahead, including Covd and climate. His conclusion is no, but not so much because of the embedded Treasury culture that drives many of its critics to despair as because of its under-resourcing. He argues this takes two forms: just not enough money and people, unable to retain staff; and also too many smart generalists who get moved around, and not enough people with deep expertise in say tax policy or financial regulation who stick around. Together these make for inadequate institutional memory and expertise.

So whether you’re interested in the soap opera aspects – who blames whom for what – or the underlying policy debates – how good/bad has the impact of QE been or how should financial supervision be structured – there is a lot to enjoy in this book. Highly recommended for anyone interested in UK economic policy. 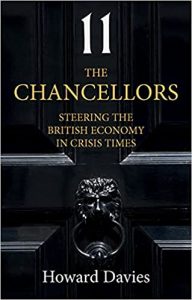