Despite the title, the main argument is that there is no single Eureka moment. While we often credit some well-known individuals (such as the Wright brothers or John Logie Baird) with an invention, all inventions rely on bringing together a prior series of other inventions. For example, Babbage never could build his mechanical computers; computing had to wait for electronic valves, transistors and then chips, as well as the insights of Turing and Von Neumann. Predecessor inventions are essential. Yet at the same time, it is often an outsider – such as the Wrights or Baird – who question received wisdom and join the dots to bring the new thing into being. It takes an outsider to not know that something isn’t possible…

The most interesting chapter in a funny way was the one on barcodes (which also feature in Tim Harford’s Fifty Things…). Apart from the fact that they’re less obvious as ‘an invention’, the corporate aspect to this was very interesting. Tech companies were pitching a product to supermarkets that would cost a good deal in upfront investment and needed co-ordination across competing chains to set technical standards. Retail has undergone some huge, productivity-enhancing technical changes over time. It has gone from entirely labour-intensive (shelf stacking, checking out, packing) to using increasing amounts of capital (conveyor belts, scanners) and free labour (customers doing the packing), then still more hard and soft capital (automated checkouts with scanners and sophisticated software) and free labour (we do our own scanning now too) to eventually Amazon-style stores where the paid human labour has gone and the free human labour reduced, but the software greatly augmented. All of this requires barcodes.

It was interesting to learn about some of the prior contributions to the iconic innovations, and the book is an easy read thanks to a lot of biographical background on the various people, often eccentric. The computer and mobile phone histories are ones I’ve read a lot about before.  I think Francis Spufford’s Backroom Boys (albeit only UK focused) is a far better read, if you’re only going to read one general interest book about a range of inventions. But Eureka is very enjoyable, and looks at different technologies from a US perspective, & I’d recommend it. 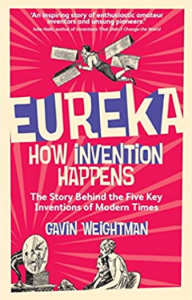