In 2011 the CEO of Nokia, Stephen Elop sent a memo to staff comparing the business to a burning platform from which it was essential to jump in order to change course. He was referring to the disruption of Nokia’s revenues and profitability by Apple and Android smartphones, and he was right. Rebecca Henderson’s Reimagining Capitalism in a World on Fire is essentially arguing that most of the world’s businesses are on burning platforms, if only they knew it. Either the disruption of climate change consequences, or of social insurrection due to inequality – or, as it turns out, the effect of a global pandemic, though the book predates this – will destroy capitalism. Unless businesses across the board change their ways.

I got the book as it was one of the FT Business Book award shortlist titles I hadn’t yet read (I don’t fancy the ones on Netflix or Instagram, but have read & enjoyed all of Deaths of Despair, If/Then and The World Without Work). Henderson clearly has vast experience of engaging with businesses of different kinds, and much of the book is about the success stories – those that have re-engineered themselves to become oriented toward purpose rather than profit. The examples include Unilever and Aetna, described in some detail, as well as old chestnuts like the worker-owned John Lewis and Mondragon, and a range of smaller companies, and industry initiatives like the move to purchase sustainable palm oil.

The book has a good term for what’s needed to make the kinds of changes described in these examples: architectural disruption. As Henderson acknowledges, many more businesses are still oriented toward short term profit and share price rather than long-term social purpose – even though the purpose-driven businesses ultimately do far better in conventional terms. She identifies some key barriers, among them the necessary big internal re-organisation and culture change. Becoming a purpose-driven and high productivity business requires a high level of trust within the firm, and many managers are unwilling and able to embark on this programme.

There are external barriers too: the short-termism of some investors, the difficulties of getting co-operation among businesses, and the political and regulatory context. So reforms to corporate governance and finance (including proper risk-measurement and accounting), and to the political climate of ideas will be needed in addition. List all that’s needed and it can seem daunting. But we’re all on a burning platform. My guess is that several forces will converge to bring about change – millenial employees demanding better, political upheaval given the state of the world, and un-ignorable consequences of the damage to nature. Whether the change will happen fast enough is another matter. 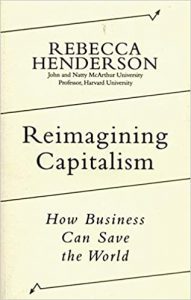