I would be an even bigger fan of Michelle Meagher’s provocative book if she had stuck with the subtitle – How Big Business is Harming Our Society and What to Do About It – and not gone for the title ‘Competition is Killing Us’. Because it’s the absence of competition that’s killing us – as indeed this very accessible and well-argued book goes on to explain. There is a footnote on page 2 referring to a glossary explaining that ‘competition’ as used here doesn’t mean, well, competition, or rivalry between firms contesting with each other for customers. Here it is used to mean big businesses eating up more and more market share, lobbying to get the rules of the market economy shaped to their own advantage, and generally subtracting value from society rather than adding it.

This is a shame. It means the book adds to the general confusion on this point, as I think quite a lot of people hear ‘business’ when they see ‘competition’. When economists talk about competition, though, this does not mean arranging things in the interests of business. Far from it. Economists love competition (on my definition) while businesses hate it. I particularly love competition, having spend 8 years as a member of the Competition Commission and recently having been a member of the Furman Review panel.

Other than this – quite a major point, and one which I failed to persuade Michelle about before the book was published – this is a great book and well worth  a read. It’s of the moment too. Our own Competition and Markets Authority is gearing up to tackle the market power of the digital giants, as is the European Commission with its greater impact, and even – perhaps – the US with the publication of a pretty fierce House Judiciary committee report this week. It does feel like we are seeing the tide turning away from big companies and in favour of fewer mergers, tighter corporate governance rules, and a far, far greater emphasis on the need for business to serve society rather than profiting at society’s expense. 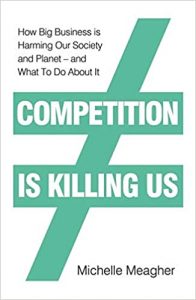