Many people will be familiar with Anne Case’s and Angus Deaton’s work on deaths of despair – the increase in death rates in the United States due to suicide, (legal and illegal) drug overdose and alcoholism, and the fact that life expectancy in the US has now declined for three years in a row. The research is brought together in compelling form in their new book, called Deaths of Despair and the Future of Capitalism.

Much of the book is concerned with descriptive analysis of the patterns within these totals. The short answer is: white, working age people with no college degree. While on many indicators things are worse for African-Americans, the trends have been improving for them. Education stands out strikingly as a key differentiator. While the adverse trend is most noticeable from around 2000, for Americans with high school education only things have been getting worse, in terms of despair, in every cohort for decades.

The figures here are for the US, and some of the causes are US specific. Its racial legacy from slavery is unique. Its appalling “health care” system stands out as a major culprit – the costs, the perverse incentives it creates, the lack of coverage. But not only healthcare. The pharma industry is portrayed as a rent-extracting machine. The authors criticise the FDA for approving opioids for general prescription, particularly OxyContin: “The FDA was essentially putting a government stamp of approval on legalized heroin.”

However, it may be that the US and its particular form of weaponized capitalism is only an extreme and early version of something happening elsewhere. The education divide – whose causes and consequences I think we still need to understand in the round – is manifest throughout the western economies. The skill-biased technical change, the “assortative mating”, the concentration of good jobs in big cities, are all occurring throughout the west. Life expectancy gains in the UK have halted and reversed for some groups, and the recent Marmot Review highlights serious inequalities and challenges. Interestingly, the trends seem to be more adverse in English-speaking countries in general. But not unique.

When you consider the harm a number of other industries are doing to us, their customers – highly processed and sugary foods and drinks, finance, tech, as well as pharma and alcohol – it’s perhaps surprising there hasn’t been even more of a backlash against modern capitalism. The final section of the book runs through the broad economic trends behind the adverse outcomes for the once-robust white working class, and lists what could be done. Each item on this list is a major challenge, not least politically – reform US healthcare, anyone? But it extends also to improving corporate governance, anti-trust enforcement, higher minimum wages, improving educational outcomes. The system is broken and every bit of it needs fixing. This is a sobering – and essential –  book. 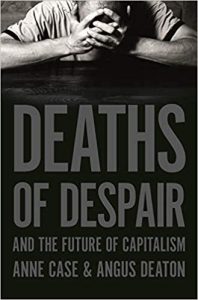 One thought on “Deaths of despair”