I didn’t expect to enjoy Robert Skidelsky’s new book, What’s Wrong With Economics: A Primer for the Perplexed, for he has long been forthright about his low opinion of economics and economists; and so it proved.

He makes some good points, nevertheless. Indeed, some I strongly agree with, as do a lot of other economists. For example, many of us would agree about the importance of studying economic history; even some of the nerdiest econometricians and theorists I know devour the big new econ history books. Likewise about the importance of taking into account psychological realism – behavioural economics, hello! (Though standard rational calculation of self-interest often matches reality better – it’s all about the context.) Institutional economics is everywhere now, in the tradition of Coase, Williamson, et al. Lord Skidelsky approves of it (albeit preferring the old institutionalism to the new transactions-cost based approach); he just seems to be under the misapprehension that it’s a neglected part of the discipline.

In sum, there is indeed much here that I and many other economists of my acquaintance agree with. Big ticks to history, institutions, psychological realism, even to acquaintance with sociology or anthropology.

So why did I not enjoy the book? It talks about “the poverty of neoclassical economics under its carapace of techniques.” This is absurd. While certainly there is some excess ‘mathiness‘, technique is a vital thing in any discipline. Even historians have techniques, and models (‘the causes of the first world war’). Does this carapace consist of too much ‘theory’? As Beatrice Cherrier has blogged, there has been a significant shift to applied work in economics, even though its description as the ’empirical turn’ has been over-stated.

But above all, despite insisting on the importance on both economic history and the history of economic thought, the book is ahistorical in its approach to economics. It attacks an economics it labels as ‘mainstream’ or ‘neoclassical’. Whatever it means by mainstream, this isn’t what most economists do. As ever in such critiques, the book only talks about macroeconomics, doesn’t cite a single piece of applied microeconomics, but above all ignores the fact that economics has changed in the past 10, 20, 30 years.

I do think there are serious methodological issues in the present (‘mainstream’) economic paradigm – my next book, Cogs and Monsters, out around this time next year, will be about this.

Meanwhile, What’s Wrong With Economics is concise, clearly and elegantly written and spends half its length demonstrating that the other half is – well, about what’s right with economics. 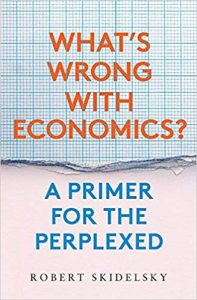