I was very pleased to receive in the post a copy of Andrew Whitby’s book The Sum of The People: How the Census has Shaped Nations, which I read in a proof copy and wrote one of the back cover blurbs for. I am perhaps peculiarly interested in statistics and the story of statistics, but this book is genuinely a page-turner from the first page of the Preface on.

It’s a broadly chronological account of the history of censuses from the dawn of recorded history (China’s Yellow River region, ancient Mesopotamia) to the present day. It weaves into that the history of technologies for counting people, including for example the story of the BBC’s 1986 900th anniversary version of the Domesday Book – on an aluminium laser disc. As the book points out, the vellum of the original has had greater longevity and it has been digitised.  And of course demographic trends feature too, for example in the ‘population time bomb’ debate of the late 60s and 70s.

Of course, the most interesting aspect is why the cenus matters, which is its relationship with power and money. They are always either political or politiczed. One vivid illustration is the Allied attack on the Dutch population registry in early 1944, which killed around 60 civilians working there but destroyed one in four of the records so a quarter of the identity cards the occupiers asked for unable to be verified. Too late for Dutch Jews, of whom 73% had already been murdered, but very helpful to the Dutch Resistance as the war drew toward its end.

The book ends by observing that the current censuses in and around 2020 – US, UK, China and elsewhere – my well be among the last of the traditional kind where enumerators try to get a response from everyone. The use of administrative records is likely to take over in future. Cost is a major reason, as is evidence of systematic undercounting in some countries. But I must say, the idea of being reliant on big data stored in centralised population registries leaves me a bit uneasy: is this the ideal way of capturing the relationship between individual and state? As the book puts it, “In a time when so much information collection is covert and passive, the census is the opposite: it demands our active attention.” Another human will ring the doorbell. It’s a shame this will surely pass into history. 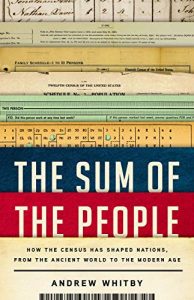