Richard Ovenden’s Burning the Books: A History of Knowledge Under Attack is really interesting. The author is the librarian of the Bodleian Library at Oxford University, which was the first big, scholarly library I used after my local lending library in the Lancashire mill town of my girlhood. I love libraries and have alsways loved the joke that humans are the means by which libraries reproduce.

Burning the Books is fundamentally a warning about present vulnerabilities to the loss of knowledge. It is roughly historical, from the ancient loss of the Library of Alexandria to the fate of the archives in Iraq and Sudan recently. On the way, of course, the Reformation, other wars, and the Nazi book burning. Record keeping started as an administrative matter of course, and the requirements of states to measure, assess and record grew over the centuries; but over time too came the idea of records as a public good and vehicle for accountability. There are stories of loss but also of rescues, painting a picture of the importance of archives and libraries as vehicles of historical memory and cultural identity.

The book ends with a sober chapter about the difficulty of archiving in these digital times, both because of the volume and the ephemeral nature of digital records. And also, importantly, because the historical record has been privatised and outsourced to the big tech companies. So the author ends with two excellent proposals: that tech companies should be required to ensure public bodies charged with the responsibility have access to all the data records – this shouldn’t be a matter of serendipitous web scraping; and that a tax on the tech giants should pay for these important memory guardians. 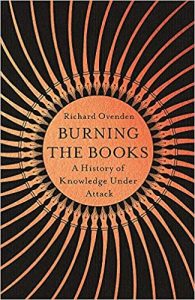