Jon Agar’s new book, Science Policy Under Thatcher, is an interesting dissection – based on newly released government documents from the National Archives – of the u-turn in science policy in the UK in 1987. The campaign against cuts to government funding of research had begun a year earlier, with the launch in January 1986 of Save British Science. Agar argues that those cuts did not mark a specific science policy shift; that came the following year with three changes: a restructuring of science advice to government to increase central control of the machinery; the document A Strategy for the Science Base, which distinguished three tiers of institution, namely a few research-intensive universities, teaching-focused centres, and near-market entities; and finally – under the ideological influence of the Number 10 Policy Unit and its adviser George Guise – a focusing of government funds on pure, ‘curiosity-driven’ science and major cuts to near-market research funding, along with the privatisation of government research labs undertaking such activities.

This was a significant shift away from the previous conventional wisdom. It had emphasised the need for government-funded research to deliver identifiable economic returns. For the Thatcherites, this meant the bad old ways of winner-picking, and civil servants pre-empting the decisions of private sector managers and investors who were far better placed to take risks and judget markets. The switch to funding ‘market failure’ pure science was part and parcel of the dumping of industrial policy (a contradiction in terms, more or less, to the free marketeers).

Interestingly, we have now a policy u-turn back through another 180 degrees. And although I strongly support the need for government to engage with research across the entire spectrum from far from market to near-market, there is a danger of making the same mistakes all over again as policy makers go back round the goldfish bowl. The enthusiasm for ‘sector deals’ makes me very uneasy, as these are almost always the outcome of successful lobbying efforts, and probably encouraging anti-competitive outcomes. After all, which companies are in the ‘auto sector’ today – and which will be in 10 or 15 years? What about new entrants – how do they get in on ‘sector deals’? Similarly, although ‘mission oriented’ policy is terrific in theory – who could argue with a mission like ‘decarbonise the economy’ or ‘deliver high quality social care’ – in practice it risks translating into officials getting involved in battery technologies and enthusing consultancies with the potential new opportunities.

The experience of the 1980s should also make those interested in science policy and industrial policy now reflect a bit before concluding that back to the pre-1987 future* is the right way forward. ‘Should the government mainly fund basic science or near-market research?’ is the wrong question. Governments of course should fund basic science, which is a classic market failure. But the policy challenge isn’t about money so much as co-ordination and facilitation – ensuring industry standards emerge fast enough and at the right level to grow new markets, enforcing competition law, using government procurement to give investors confidence there will be demand for innovations in areas such as health care or education, making sure the financial tax and regulatory system provides incentives to invest in growing tech businesses, and so on.

The overview of the 1987 policy switch is contained in the final chapter of the book, and as it contrasts with previously-published versions of Thatcher’s science policy there will no doubt be further debate about it among historians of science policy. Agar’s account seems (to this non-expert) very well documented and persuasive. The earlier chapters single out specific issues or episodes, such as civil nuclear power, the environment, and the public debates over AIDS and IVF (the Warnock Commission – my colleague Sarah Franklin and her team have done tremendous archival and interview-based research on this). The book could have done with a bit more synthesis as it’s easy to get lost in the weeds. On the other hand, the detail is deeply fascinating for anybody interested in the mechanics of government and policy-making. I really enjoyed reading it. 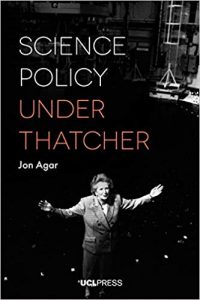