Democratic Capitalism at the Crossroads: Technological change and the future of politics by Carles Boix is a good complement to the widely reviewed The Technology Trap by Carl Frey. It takes a political science perspective on the same deep trends in technology, and even uses the same geographic shorthand for the succession of technological/economic paradigms: Manchester, Detroit and Silicon Valley.

Coming from a different perspective, Boix provides new-to-me insights, and particularly about similarities between the sucessive technological revolutions. For example, in an 1835 book, The Philosophy of Manufactures, Andrew Ure described the factory as “a vast automaton composed of various mechanical and intellectual organs, acting in uninterrupted concert for the production of a common object, all of them being subordinate to a self-regulated moving force.” Echoes of cybernetic visions – see for example Eden Medina’s fantastically interesting Cybernetic Revolutionaries on Project CyberSyn. Or a 1934 book, The Mechanization of Industry by Harry Jerome, which estimated that almost half the labour productivity gains in the first 30 years of the 20th century resulted from “the mechanization of the handling systems”. Echoes of the role of logistics now, for example set out in the McKinsey’s study into US productivity in the late 1990s – Walmart and wholesaling.

After the historical section, Boix goes on to the implications for politics today, and particularly the increased vote for extremist parties – the highest since the 1930s. Writing this on the day “Boris”Johnson is expected to become the UK’s prime minister, with Donald Trump beginning extra-judicial deportations from the US, and strongmen on the march in other countries, it is hard to be optimistic. However, Boix, like Frey, implicity raises one question without addressing it: what made the production paradigm of the mid-20th century. which also led to massive automation, able to deliver widely shared gains, and why is the direction of the earlier and later technological revolutions so different? I haven’t seen a persuasive answer. 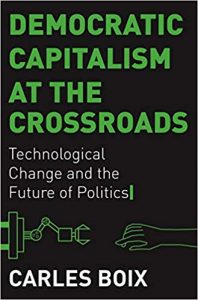