Jesse Norman is one of the most thoughtful of the UK’s MPs, a principled Conservative, and has followed up his earlier biography of his hero Edmund Burke with Adam Smith: What He Thought and Why It Matters. It’s an excellent overview of Smith’s life and work. It would make a terrific read for economics students but also has much to interest those who’ve read every book about Adam Smith going. Like many recent books about Adam Smith (such as Emma Rothschild’s Economic Sentiments and Nicholas Phillipson’s biography An Enlightened Life), it reclaims the Theory of Moral Sentiments as having equal importance to The Wealth of Nations.

Part of Jesse Norman’s aim is to dissociate Smith from the ‘free market’, invisible hand caricature of many conservative economists and thinkers. The first part of the book is a pretty standard biography, nicely done. The second part is a history of how neoclassical economics came to hijack Adam Smith, stripping away from his thinking much of its richness and depth, not only in terms of human behaviour (not narrowly self-interested in Smith) but also in terms of institutional context (dynamic, contingent, evolutionary). The book has a nice section on Vernon Smith, whose experimental work in the 1980s was an early critique of the assumptions of neoclassical general equilibrium theory. In effect, it argues, much of modern neoclassical economics as it peaked in the late 20th century was foreign to Smith’s approach. What Smith did do was: “Set out the field of political economy with markets at its centre,” but in a way that makes institutions and historical sensibility equally central.

(There is also a section on Smith’s strong, principled opposition to the slave trade. It can never be said often enough that economics got the label ‘the dismal science’ from Carlyle because economists were prominent campaigners against slavery.) 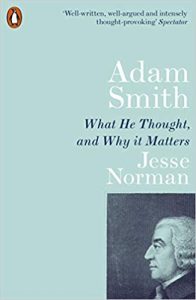 The book ends with a section on ‘why it matters’ and what a Smithian perspective would be on the economy now. Norman notes the tyranny of the arid mainstream perspective in policy economics right up to the financial crisis (although academic economics had by then already started to move decisively away from free marketism): “What is so striking about that crisis in retrospect is not, even, the egregious self-enrichment of the previous decade, or the specific failures of policy, law and enforcement involved. It is the intellectual grip which the language of free markets held on almost all the parties concerned, regardless of the often very different reality.” Indeed, free marketism still has a strong grip on policy, given that so many policymakers were trained in their economics when it was still at its peak.

What is to be done about this. “We need a new master narrative for our times,” Norman writes (italics his). The book calls for political renewal too. Who could disagree? (Although that makes it disappointing that Jesse Norman declared himself a supporter of Mr Johnson in the current Conservative leadership campaign.) It concludes, of course, that returning to the true Adam Smith can help shape the new narrative with markets still central to economic life but understood in the context of a political economy in which institutions, historical context and human nature play their proper role.