One of the benefits of reviewing book manuscripts for publishers, apart from the obvious one of getting to read great books early, is that they generally offer a few books from their catalogue as a reward. I tend to pick titles outside the economics list. So it was that University of Chicago Press sent me a few books a while ago, including a new edition of Hannah Arendt’s The Human Condition. As economists are not all that widely educated, I’d never read it before. I thought I’d better go ahead and do so when one of my political science colleagues saw it on my desk and said, oh yes, we teach that. 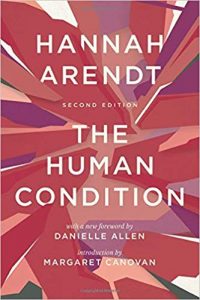 Sadly, I wasn’t bowled over by the experience. Apart from a great new introduction by Danielle Allen, it’s mainly pretty impenetrable stuff interspersed with some tantalising rhetoric – which then doesn’t entirely make sense to me. For example, “It is in the very nature of this society itself that privacy in every sense can only hinder the development of social ‘productivity’ and that considerations of private ownership therefore should be overruled in favour of the ever-increasing process of social wealth.” Sounds impressive. Not entirely sure what ‘this’ is referring to – modern capitalism as earlier in the same paragraph? Mediaeval society as in the previous paragraph? I think this is a critique of Proudhon but am not entirely sure. Of course I haven’t read Proudhon, which doesn’t help, not the ancient Greek texts referred to so much in the book.

All this says is that I’m an economist unused to reading political theory, of course, and no doubt I’d be a better person if I had been taught this at a younger age.

I did, though, return to Gramsci’s Prison Notebooks, which I had read in my youthful radicalism, prompted by a conversation with someone yesterday who half-remembered this: “The crisis consists precisely in the fact that the old is dying and the new cannot be born; in this interregnum a great variety of morbid symptoms appear.”

Now, this does seem to speak to the modern age. 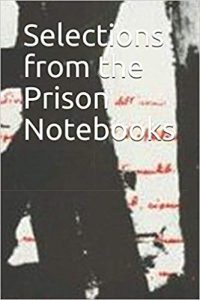