Anybody interested in the economic impact of digital and AI, in particular on jobs, will want to read Carl Frey’s new book, The Technology Trap: Capital, Labor and Power in the Age of Automation. He is probably best known for his rather gloomy work with Michael Osborne (original pdf version here) highlighting the vulnerability of many jobs – almost half in the US – to automation in the next couple of decades. The book expands on the issues that will determine the actual outcomes, and is – as the title indicates – still quite pessimistic.

The structure of the book is historical, with sections on pre-industrial technologies, the Industrial Revolution (which saw widening inequalities), the mass production era (which reduced inequalities and created an affluent middle class), the recent polarization in the era of globalisation and digital, and future prospects. The key distinction Frey draws in between technologies which substitute for labour and those which complement it. Whereas the 19th century and the present seem to involve the replacement of people with machines, the 20th century innovations needed increasingly skilled labour to work with them.

Although I am probably not as gloomy about future prospects for work and incomes, I really enjoyed reading the book, which covers a wide range of technological applications in addition to the well-known historical examples. It leaves open two questions. One is about the present conjuncture: what explains the combination of seemingly rapid technological change and adoption with – in at least some OECD economies – very low unemployment rates? The answer might just be ‘long and variable lags’ but the question surely needs addressing.

The broader question, or set of questions, is really about the interaction between technology and labour market and other economic institutions. Although automation is likely to have the same general effects everywhere, the outcomes for workers will be refracted through very different national job markets, education systems, tax systems and so on. How much can any individual country lean successfully against the wind? Frey is not (unlike Robert Gordon) US-centric but does not get into these issues.

And beyond the response to technological change, what is it that determines the direction of technical change in the first place? The book treats the labour substitution or complementing as exogenous. But why were electric unit drives in auto plants and internal combustion engines created as complementary and yet automation in today’s car industry seems like it will substitute for labour? It seems to me this must be an institutional story too, but I don’t think it’s been told yet. 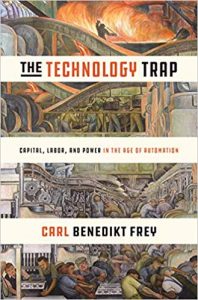