All economic growth has occured through urbanisation, but modern industrial capitalism dramatically so. Robert Hall once drew a parallel between economic booms in time (business cycles) and space (cities). This is a preamble to saying I’ve always enjoyed books about cities, or perhaps it’s an excuse for my interest. Recently I polished off The Ghosts of Berlin by Brian Ladd, a sort of history through architecture and urban form. This week it was Why Cities Look the Way They Do by Richard Williams. It argues that cities are the result of the interaction of many different processes occuring through time, and the chapters each explore some of these – culture, war, sex – and also money, work and power. In other words, there’s nothing intentional about how cities look, for all the efforts of the planners. Different cities are used as examples; the book’s focus is mainly big global cities but others such as Liverpool and Portland and San Paolo feature too.

I particularly liked the money chapter’s observations on real estate. It points out that some iconic supposedly residential towers such as 432 Park Avenue in New York are only half occupied and that this is intended. For they are not homes but investment assets, whose owners don’t care if they’re never occupied. Money buys space, and the emptiness is a store of value in the context of economic agglomeration. Of course there’s a poignant contrast with a city like Detroit, which is emptying, but whose spaces mark depreciation, not appreciation, of the asset. The chapter about the culture industry and its self-contradictions is nicely spiky, as is the one about the hipsterisation of industrial buildings in the modern world of work. As someone who grew up in an old-fashioned industrial place, I’m happy with the hipsterisation process; Manchester now is a better urban environment for its humans now than it was in the early 80s even though it’s lost the gritty culture/music scene of that era. But I can understand the regrets for lost authenticity.

Why Cities… has loads of pictures, too. The author is an art historian, so reading it prompts one to look. Very enjoyable.

Why Cities Look the Way They Do 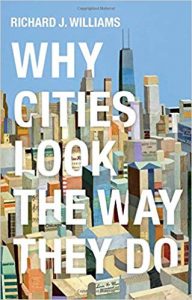