For reasons I needn’t go into, I spent much of today reading The Anti-trust Paradigm: Restoring a Competitive Economy by Jonathan Baker. It’s a very lawyerly in style and US-focused book. With that caveat, it’s actually a good overview of the current debate about competition policy, and the Chicago School versus neo-structuralist (aka ‘hipster’) clash going on in the US at the moment. One of its strengths is that it’s pretty even-handed. Although the book argues for sticking with an economics-based anti-trust policy, focused on consumer welfare, it also argues that the Chicago School goes too far beyond this with its set of presumptions (for instance, that vertical mergers are basically always fine, or that false positives preventing mergers that are not anti-competitive are far more costly than false negatives that let anti-competitive mergers go ahead).

The book sets the scene with the evidence on increasing concentration in US markets, and the adverse implications decreasingly vigorous competition has for the economy. What I particularly like about the book though is that it sets competition policy in its political context, making the case for a technocratic approach – to avoid the dangers of political capture and cronyism – but within the boundaries of a broader political settlement. Baker argues that for much of the post-war period, US anti-trust policy was shaped by the consensus about the form of American capitalism, delivering widely shared benefits including through the welfare system. Never explicit, this nevertheless set the climate for the decisions made by regulators and judges. He portrays the crumbling of this settlement, the growth of market power across the economy, as the backdrop for the decreasing consensus about anti-trust policy. In this situation, technocratic enforcement cannot function.

There is a section on digital markets, which I was interested in of course; it essentially briefly sums up the state of debate in a growing literature. And a final chapter advocating a more forceful American anti-trust policy (the US gets compared unfavourably to Europe) but one that abandons the cul-de-sac of the pure Chicago School. Although the application of anti-trust policy in America has diverged considerably from Europe, despite being underpinned by the same economic analysis, this is a useful book to understand the present US debate – and also why its conclusions are not very relevant to this side of the Atlantic. 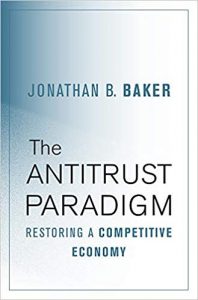 2 thoughts on “The limits of technocracy in competition policy”