The heading of this post is not an invitation for the usual jokes about economic forecasts. It’s clear that most people think forecasting is what economists do, by and large, and that they do it badly. Indeed, some forecasts are a tissue of nonsense – pretty much any UK economcy & trade forecast from Patrick Minford these days for example, although 20 or 30 years ago he was a serious forecaster. I spent a few years myself in the mid/late 1980s doing macro forecasts for the UK and a few other countries, and later, as Economics Editor of the Independent, awarded an annual Golden Guru trophy for the UK forecast of key macro variables closest to the published figures at the time of the award – a necessary qualification because many macroeconomic statistics, especially GDP, are significantly revised over a period of years.

The revisions are with us still, but the techniques of forecasting have greatly improved since then, although of course there is a wide quality range among economic forecasters. For a non-technical guide to economic forecasting, there could be nothing better than Forecasting: An Essential Introduction by Jennifer Castle, Michael Clements and David Hendry. It is a crystal clear and intuitive explanation of what macroeconomic forecasts can and can’t do. It explains the inherent difficulties in trying to forecast the future of a complex non- linear, non-stationary system in which behaviour can be affected by forecasts themselves, all from a limited amount of past data. Better still, it explains the empirical techniques this ace team have devised to tackle some of the challenges.

My only complaint about the book is that the charts are a bit too small for my middle-aged eyesight. Although non-technical, there are lots of charts and it probably won’t make the bestseller list. However, it should be read by any student about to do a time series economietrics course, and to anybody about to start a job as a forecaster. Economics students are proficient in all the relevant software, have ploughed through the statistical theory in their econometrics courses, but anybody starting out as a forecaster naturally lacks the wisdom that comes with the experience of handling the data and seeing your lovingly estimated model produce some dreadful out-of-sample forecasts.

This book represents a treasure trove of crystallised wisdom. It offers up practical insights in clear prose. For example: “This principle of differencing is a method to remove the deterministic components of a forecasting model, by which we mean intercepts and trends. Deterministic terms capture the underlying equilbrium and growth rate of a variable of interest, so are fundamental to modeling, but can be catastrophic for forecasting when either component changes. The differencng principle can be applied to any model with an inherent equilibrium to which it corrects. … But…. if the object needing to be forecast is the level, a good performance forecasting the differences is not necessarily sufficient, as cumulating those differences may lead to an increasing divergence from the level.”

The book ends with some reflections on the limits to forecasting. Some things are inherently unpredictable – including events like the financial crisis which hinged not only on prior macroeconomic trends able to be captured in a macroeconometric model but also on unexpected policy decisions like letting Lehman Brothers go bust. But  the book notes that the forecasting process is not just about numbers but also about the narrative, at least in any macro policy context. Hendry coined the term ‘forediction’ to capture this.

No doubt the public at large will continue to mock economists and their forecasts, but they will always be needed, and in that case should be as good as economists can make them. 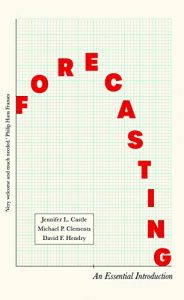