After a week on holiday reading detective fiction, I’ve devoured 1931: Debt, Crisis and the Rise of Hitler by Tobias Straumann. I’d never picked out 1931 as a particularly significant year, knowing nothing about the German banking crisis that year. Yet, the book argues, what hapened “is a story of almost biblical proportions, demonstrating how quickly a situation that seems manageable at first can spin out of control.” Greek tragedy was the comparison that came to my mind: every person doing exactly what they inevitably had to, ending in disaster because of the situation.

The book, which is highly readable, starts with an economist I’d never heard of, ‘The Raven of Zurich’, Felix Somary, the Cassandra who warned of disaster staring as early as January 1930. It didn’t happen for another 18 months, with the collapse of German banks after the Credit Anstalt collapse, so Somary was mocked. But had seen the inevitable consequences of the combination of the Depression, the burden of reparations on Germany, the international imbalances that resulted from the country seeking short term foreign capital, and the efects of consequent repeated rounds of austerity on German politics.

The circumstances were of course highly specific, yet throughout the book, there are alarming parallels with the post-GFC west. Take the Smoot-Hawley tariffs, signed into law by President Hoover despite the fact that over 1000 American economists warned him against doing so. In Germany itself, the parliamentary processes of the already weak Weimar republic were increasingly debased by extremists. The latter, prominently the Nazi party, welcomed the chaos.

By mid-1931, wages and pensions had been cut, unemployment was high and rising, there was no prospect of relief from the burden of reparations or indeed further short term financing to help Germany meet those payment – and then the main banks started to topple and experienced massive bank runs. “It felt like the end of capitalism as people knew it.” Arnold Toynbee wrote that “men and women all over the world were seriously contemplating and frankly discussing that the western system of society might break down and cease to work.” In important ways they were right.

It’s a relatively short book that reads like a thriller, and – as Straumann concludes – illustrates the fundamental point that “Only when domestic electorates are prepared to accept a loss of sovereignity for the benefit of cross-border co-operation can international institutions and agreements have a chance of working effectively.” When a debt crisis makes sustained growth difficult and  leads to repeated austerity measures, electorates start to wonder what the point is. 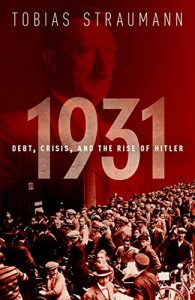