The title of Frans de Waal’s latest book is a rhetorical question: Are We Smart Enough to Know How Smart Animals Are? I thoroughly enjoyed reading it. De Waal’s deep knowledge shines through every sentence, as does his delight in all the creatures (especially other primates) he has spent his career studying. The book is about the evolution of cognition and emotion in animals (including humans). It particularly debunks Skinner’s behaviourism – mental processes as a black box, but manipulable using reward and punishment. (This of course the approach behind the present fashion for behavioural economics, a fashion I find troubling because some of its enthusiasts do so clearly see themselves as omniscient scientists ordering society for the better by manipulating the choices of their less intelligent subjects.)

I learned a lot from the book, including that the elephant brain is the one with the most neurons (about 3 times as many as we do). The neural differences between humans and other primates are not sufficient to make us unique in all aspects (although we clearly are in some, notably language). De Waal argues we should assume continuity, a spectrum of cognitive abilities between different animals, rather than sharp and wide distinctions. He notes that psychology is moving to accept this assumption, but the social sciences tend to assume human discontinuity – “But what does it mean to be human?” he reports social scientists asking him. “I usually answer with the iceberg metaphor, according to which there is a vast mass of cognitive, emotional and behavioural similarities between us and our primate kin. But there is also a tip containing a few dozen differences. The natural sciences try to come to grips with the whole iceberg, whereas the rest of academia is happy to stare at the tip.”

The scientific project must therefore be to develop a unitary theory of different cognitions, how cognition operates in general, and then in the case of each particular species. The book emphasises two important contributors: sense perceptions (is vision the most important to the species? or hearing, or smell?); and social relations (is it a species with strict social hierarchies, like chimpanzees, or solitary, like the octopus?) “Cognition and perception cannot be separated… they go hand in hand,” he writes. (Interesting to reflect on what this means for AI. The question is not so much what androids dream of as what they see or hear.)

To crown a wonderful book, it ends with a quotation from David Hume: “Tis from the resemblance of the external actions of animals to those we ourselves perform, that we judget their internal likewise to resemble ours; and the same principle of reasoning, carried one step farther, will make us conclude that since our internal actions resemble each other, the causes, from which they are derived, must also be resembling. When any hypothesis, therefore, is advanced to explain a mental operation, which is common to men and beasts, we must apply the same hypothesis to both.” As Hume summed it up, “No truth appears to me more evident than that beasts are endowed with thought and reason as well as men.” 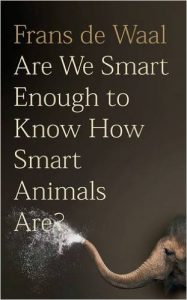 2 thoughts on “Not the smartest animals”