I read The Knowledge Economy by Roberto Mangabeira Unger because James Plunkett (who reviewed my Cogs and Monsters for Prospect) tweeted how struck he was by the similarities between Unger’s book and mine. I can see what he means as we are after all writing about the same phenomenon of the increasing intangibility of value in advanced economies. Indeed it’s 25 years this year since my first book The Weightless World was published, so I’ve been writing about it for a quarter century, which is pretty startling.

However, one of the strange things for me reading Unger is the way we approach the same phenomenon using different languages, so I found some of his observations hard to understand. One of those is a key term, vanguardism, which can either be insular (what we have no – bad – only the few benefit from the knowledge economy) or inclusive (good, what we want). If you read left of centre philosophy perhaps this doesn’t need explaining, but it mystified me.

In the end, the way I translated this was as referring to a system of production (to use the terminology of, say, Michael Best, particularly his older book The New Competitive Advantage but also How Growth Really Happens) – from Fordism to post-Fordism to whatever is emerging now (a prize for whoever comes up with the best ‘-ism’ term?). And there are some very interesting observations in The Knowledge Economy. For instance, Unger reckons the progressive left is too focused on demand side questions (MMT and all that, redistributive tax) and not enough on the supply side – the issue not even being ‘pre-distribution’ but something more deeply structural. 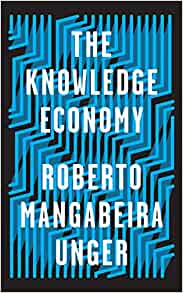 Unger criticises the dominance of economics by marginalism, which I’m on board with, as indeed with his observation about the importance of ideas in shaping the realities of economic life. We’re in the mioddle of a period of contestation of world views for the first time since the late 1970s, although the free market Thatcher/Reganism or neoliberalism (or your preferred term) is putting up a stiff fight. But then he oddly asserts that economists are not interested in production. This would be news to all the many I/O economists and institutional economists out there. All in all, I found this an interesting read but in the end a bit abstract. If only I understood what inclusive vanguardism meant. Still, this is the joy of stepping outside your own discipline to look at it from the perspective of others.